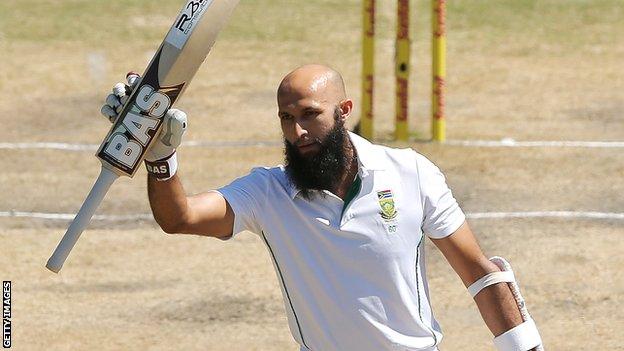 The 31-year-old batsman succeeds Graeme Smith, who retired from international cricket in March after a record 109 Tests as skipper.

Amla's first assignment will be a two-match series in Sri Lanka next month with one-day captain AB de Villiers as his vice-captain.

"It is an honour and a privilege to be given this responsibility," said Amla.

"I would like to pay tribute to the leadership Graeme Smith has provided throughout my international career."

De Villiers, the number one-ranked Test batsman and the South Africa wicketkeeper, was Smith's deputy and was thought to have been a leading candidate for the Test captaincy.

Twenty20 captain Faf du Plessis was the third player considered for the role.

Last month South Africa were usurped at the top of the Test rankings by Australia, having held the number one position since August 2012.

Amla, currently playing county cricket for Surrey, is the first non-white to captain the Test side in a full-time capacity, Ashwell Prince having skippered the side on a stand-in basis in the past.

"This is an exciting challenge but one that I take on with positivity with our Test team being in exceptionally good space at the moment with the support of a strong core of senior players," said the right-handed batsman.

"I have concentrated on taking my batting to the highest possible level and now I feel I am in a position to make a contribution to South African cricket in a leadership role."

"He has earned particular respect as a role model for his humility and his upholding of the best traditions and spirit of the game," former International Cricket Council chief executive Lorgat said.

"Becoming captain is a natural progression for his outstanding career and we are indeed fortunate to have a leader of his quality."