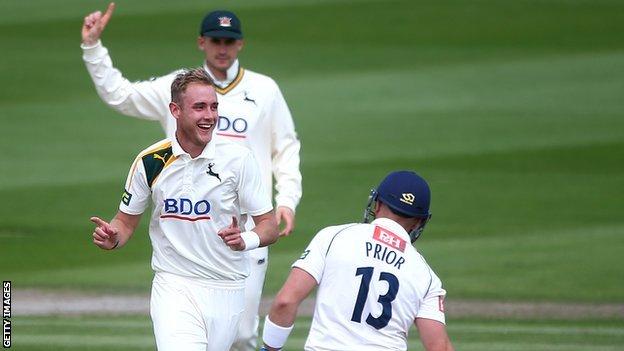 Broad (3-59) rattled through the top order, which included trapping England wicket-keeper Matt Prior lbw for 30.

Sussex captain Ed Joyce provided the only resistance with a dogged unbeaten 104, his third ton of the season.

The visitors were 408-5 overnight but lost captain Chris Read (61) and England hopeful Patel early on.

But Nottinghamshire's potent bowling attack proved too strong for Sussex for large parts of the afternoon, with Broad and Andre Adams (3-48) the pick of the bowlers as the home side toiled.

Both Broad and Prior played steadily as they aim to return from injury to the England squad for the first Test against Sri Lanka.

And Sussex will be needing more from Joyce, who batted for over four hours before reaching his century, following the pair he scored against Warwickshire in April.

"If he was not such a decent chap and such a wonderful bat, it would be pretty easy to dislike Ed Joyce, as a Notts fan.

"This was his sixth Championship hundred against the county, following on from an unbeaten double hundred at Trent Bridge last year and a winning ton in the 40-over match on this ground.

"Joyce's effort apart, this was another good day for the visitors with Broad and Siddle bowling with genuine pace down the slope and Andre Adams getting good reward for doing the donkey work uphill.

"Still in the driving seat, it is now imperative for Notts that they get the last two wickets quickly and enforce the follow-on."

"Yet again Sussex skipper Ed Joyce led from the front as his third century of the season gave Sussex a fighting chance of avoiding the follow-on.

"The innings was vintage Joyce, particularly strong backward of point and with a couple of sumptuous cover drives, he also selflessly defended the Sussex tail against the second new ball.

"In a feisty encounter which has threatened to boil over on a couple of occasions, the Nottinghamshire players were quick to congratulate Joyce showing how highly they regarded his innings.

"However, with the new ball only five overs old, Nottinghamshire will still fancy their chances of enforcing the follow-on which, with the threat of inclement weather for the fourth day, may represent their best chance of securing a victory."