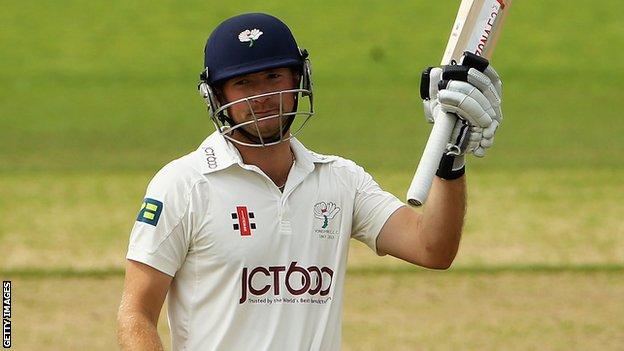 Opener Adam Lyth made a superb 230 as Yorkshire put themselves firmly on course for victory over Northants.

The left-hander's first-wicket stand with Alex Lees was ended on 375 when Lees was caught at mid-on for 138.

And Lyth finally departed when when he edged Andrew Hall to the wicketkeeper after hitting a six and 31 fours.

Aaron Finch (62) and Jack Leaning (52 not out) piled on the runs before Yorkshire declared 431 ahead, with Northants slumping to 66-3 at stumps.

Having beaten their opponents by an innings and 120 runs at Headingley in April, the White Rose county batted with a purpose after starting day three on 237-0.

Lyth and Lees soon established a new Yorkshire first-wicket partnership record against Northants, surpassing the 279 by Percy Holmes and Herbert Sutcliffe in 1919.

Matthew Spriegel removed Lees after lunch, but Lyth and Finch, who was promoted up the order after batting at six in the first innings, then added 69 in nine overs.

After Lyth was out, Finch completed his first Championship half century off 53 balls before Stephen Peters took a stinging catch at cover to give Maurice Chambers a wicket.

Twenty-year-old Leaning then underlined the depth of Yorkshire's talent pool with a six and three fours as he and Jonny Bairstow (25 not out) put on 60 before the declaration.

England's Tim Bresnan then dismissed both Northants openers with only 32 on the board and Jack Brooks had David Sales lbw for a duck before the close, but Yorkshire will still be mindful that Middlesex scored 473 to beat them earlier in the season.

"A day of toil for Northamptonshire was only eased when Matt Spriegel removed Alex Lees, finally his epic partnership with Adam Lyth, which equalled the record for the best opening stand seen on this ground.

"There was little any of the bowlers seemed able to do and just after tea, Yorkshire had duly batted Northants out of a game in which the home side had enjoyed a first innings lead of 115.

"After enduring nearly 150 overs in the field, Northants lost early wickets with Stephen Peters and James MIddlebrook undone by Tim Bresnan outside the off stump and David Sales trapped plumb lbw by Jack Brooks.

"But Rob Keogh and Matt Spriegel showed the temperament required to see out the remaining 10.5 overs and Northants will need plenty more of that if they are to avoid a fifth successive Championship defeat."