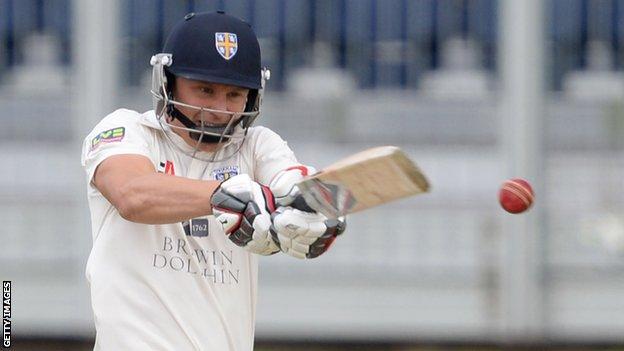 Debutant John Hastings smashed an unbeaten 38 off 29, that included two sixes, before Durham declared on 568-9.

Mark Wood removed Sam Robson and Dawid Malan before rain halted play in the last session with Middlesex on 69-4.

Borthwick, who is hoping to retain his place in the England side having played in the fifth Ashes Test in Sydney over the winter, found himself stuck on 198 for seven overs before eventually reaching 200.

It was a good day too for Australian Hastings, who claimed the prize scalp of his compatriot, Chris Rogers, who chopped on for just one as Middlesex began their reply.

England hopeful Robson made a determined 24 before Wood struck in his first over to have the opener caught behind and following Malan's departure, England all-rounder Ben Stokes removed Neil Dexter for three.

Middlesex need Joe Denly (11 not out) and John Simpson (12 not out) will be able to steady the ship on the third day as they require another 350 runs to avoid the follow-on.

"You would think after losing an entire match to the weather last week that the last thing Middlesex would want to see is more rain, but as they were reeling on 64-4 just after tea, the weather saved them from an even worse predicament.

"Durham have dominated this game and will be frustrated to not be able to make further inroads in the final session; thee 33 overs lost means 522 have now gone this season.

"The highlight of day two was 216 from Scott Borthwick, who completed the double century with his family watching from the stands. He batted for nearly seven hours and none of them left their seats during his entire innings."

"More than a session was lost to rain much to the relief of Middlesex, who find themselves in deep trouble at Chester-le-Street.

"Their off-colour performance with the ball, that helped Durham to a considerably above par 568-9 declared, was confirmed as the hosts ripped through the visitors' top order in reply.

"Toby Roland-Jones found a more consistent line and length to secure a third consecutive five-wicket return in first-class cricket, but the damage had already been done by the scoring rate on the first day.

"Durham's bowlers targeted a much fuller length and tighter line and reaped the rewards causing chaos for Middlesex's top four with swing and seam.

"Rain is set to play a part on the last couple of days and that may be Middlesex's best hope of avoiding defeat."