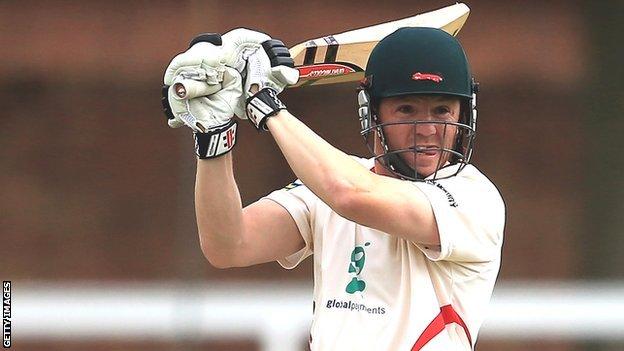 Gidman bowled Greg Smith with the first ball of the day and finished with fine figures of 5-46 from his 20 overs.

After Smith's dismissal, Angus Robson and Ned Eckersley put on 81 for the second wicket, with both making 46.

Only O'Brien offered much resistance after that and the visitors negotiated the final five overs to close on 12-0.

Wicketkeeper O'Brien hit 13 fours in his 159-ball knock, although Robert Taylor (31) did provide assistance in a stand of 62 before becoming Gidman's third victim and the sixth wicket to fall.

The hosts then lost their final four wickets for 42 runs in a clinical Gloucestershire bowling display as Gidman took his overall tally to 30 Championship wickets at a superb average of 12.93.

"A team bowled out for 269 after choosing to bat first would normally be disappointed, and there is no doubt Leicestershire would have been much happier with their decision if they'd scored more than 300,

"But as both Niall O'Brien and Will Gidman acknowledged at the close of play, there was something in the wicket for the bowlers all day, and will almost certainly continue to be as the game progresses.

"Gidman bowled beautifully from ball one, which knocked Greg Smith's off-stump out of the ground - decent pace, wonderfully accurate, and finding enough movement to disconcert every batsman.

"O'Brien had to be patient and was, keeping Gidman at bay and putting away the bad balls that came his way at the other end."

"It was another fine day for Will Gidman, and there is now realistic talk about the all-rounder being part of an England set-up as he now has 30 wickets for the season at a very economical rate.

"He had good back-up from Liam Norwell, who showed decent pace throughout the day, and Gloucestershire will now be hoping for a good partnership from openers Michael Klinger and Chris Dent: a pairing that was successful last season but has not really gelled in 2014."