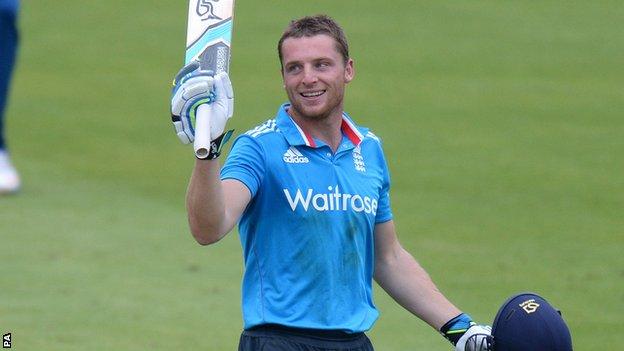 England wicketkeeper Jos Buttler said his 121 from 74 balls in the fourth one-day international against Sri Lanka was his best ever innings.

"It's brilliant to play that well but it's disappointing not to get over the line," said the 23-year-old.

"That is definitely the best I've ever played."

Captain Alastair Cook described the innings as "one of the best" he has seen, and said Buttler was an "incredible talent".

"It's a hell of an innings," he said. "He doesn't deserve to be on the losing side, playing like that."

After a Kumar Sangakkara century set England a target of 301 at Lord's, the home side slipped to 10-2 when Lasith Malinga removed Cook and Ian Bell.

The sixth-wicket pair shared 133 in 16 overs, dragging the hosts back into the game before Bopara was caught at short fine leg off the bowling of spinner Ajantha Mendis for 51.

"Me and Ravi just had some fun," said Lancashire right-hander Buttler. "We didn't think we could win, but that gave us a licence."

Even without Bopara, Buttler continued the chase, passing three figures in 61 deliveries for the fastest ODI hundred by an England batsman.

England required 12 to win from the final over, delivered by Malinga, but Buttler was run out from the fourth delivery.

"When someone like Malinga comes back at the end, you know it's going to be hard," added Buttler.

His innings comes little more than a week before the squad for the first Test against Sri Lanka is announced.

Matt Prior, England's long-time gloveman, was dropped for the final two Tests of the 5-0 Ashes defeat and has struggled with an Achilles tendon injury, only keeping for the first time this season on Friday.

But Buttler was coy on his chances of being called up for a Test debut.

"That is a different format, so maybe not," said the former Somerset player. "I've got so many areas in which I can improve as a cricketer."