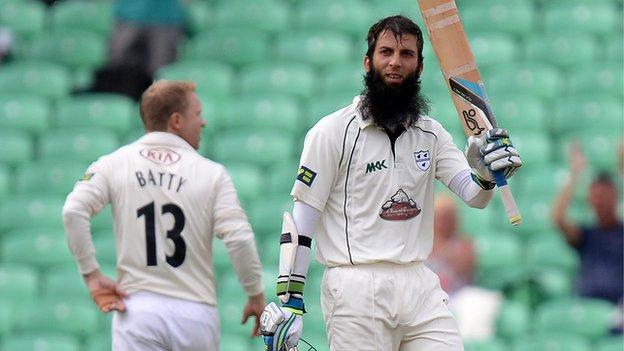 England hopeful Moeen Ali gave the Test selectors a nudge with his first century of the season, an unbeaten 138, as Worcestershire dominated against Surrey at The Oval.

In-form Worcestershire skipper Daryl Mitchell shared stands of 88 with Matt Pardoe (52) and 87 with Moeen before succumbing after lunch for 62.

But Moeen added a further 112 for the third wicket with Tom Fell (42).

And the England T20 man was still there as Worcestershire closed on 329-4.

Moeen hit 10 fours and four sixes, three of them coming in the morning session as, having come in at 88-1, he made 35 in no time, even going into lunch one run ahead of Mitchell, who had been there all morning.

The Surrey bowling improved after the interval, causing Moeen to become more becalmed, and skipper Mitchell added 28 out of the first 46 runs after lunch until he was bowled by Chris Tremlett.

England paceman Tremlett claimed a second wicket in the final session when he found Alexei Kervezee's edge, Worcestershire old boy Gareth Batty taking Surrey's other wicket to the cost of 66 runs, from his 14 overs of offspin,

The squad for England's two-Test series with Sri Lanka, starting on 12 June, will be announced this coming Thursday morning.

"An excellent innings from Moeen Ali who, after a frenetic start, got his head down to put Worcestershire into an excellent position.

"Surrey's bowlers worked hard, Chris Tremlett proving the pick but, after lunch, Moeen did not give them a sniff, showing great temperament and technique.

"Surrey know they will have to pick up some early wickets on Monday, otherwise they could be facing a very large first innings total."