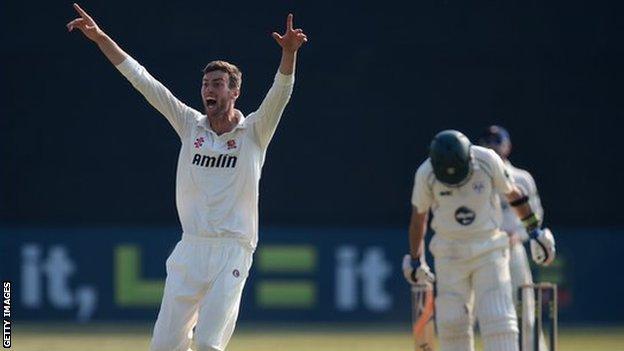 Reece Topley took 6-41 to put Essex in the driving seat after Glamorgan elected to bat first at Chelmsford.

Bragg hit 10 fours, but was caught off leg-spinner Tom Craddock when he had a century in his sights.

Paceman Topley took the final four wickets in his first Championship game of the summer.

"Reece Topley will quite rightly grab the plaudits for bagging six wickets on his return to the County Championship.

"But it was rich reward for an all-round bowling performance for the Essex attack, which was religiously metronomic in its line and length and gave the Glamorgan batsmen little to feast on.

"Do not be fooled by Glamorgan's total of 244 all out, though. This Essex pitch is slow and difficult to score on.

"If Glamorgan's bowlers perform anything like their Essex counterparts, it could turn out to be a competitive total."