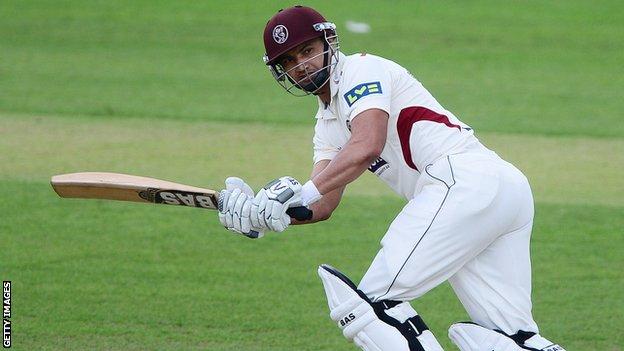 Alviro Petersen compiled his first Championship century of the summer as Somerset dominated day one against Lancashire at Old Trafford.

The South African made an unbeaten 109, sharing a third-wicket partnership of 193 with Nick Compton (91).

They came together when skipper Marcus Trescothick was bowled, offering no stroke, by Simon Kerrigan for 55.

Compton was denied a hundred of his own when he was lbw to Kabir Ali, but Somerset ended the day on 312-3.

The visitors went into the game without batsman James Hildreth, who was given permission to stay at home because his wife is expecting their first child.

He was not needed, however, after Trescothick and opening partner Johann Myburgh set the tone by putting on 61 before the latter was leg before to Tom Smith for 35.

Trescothick's half century arrived off 74 balls and it was a surprise when he elected to leave a ball from left-arm spinner Kerrigan that turned just enough to clip the top of off stump.

Petersen and Compton avoided any similar errors of judgment in a stand lasting 56 overs, Petersen bringing up his century off 146 balls with his 10th and final boundary of the day.

With an England Test selection meeting only a few days away, Compton would also have liked a three-figure score.

But he was trapped bang in front by a ball from Kabir that may have kept a little low, and Alex Barrow instead kept Petersen company until stumps, reaching 14 not out.

"Lancashire's bowlers worked hard, plugging away on a day that was perfect for batting.

"Certainly, Somerset made the most of the ideal conditions, with a fine partnership by Petersen and Compton, and it was a shame when Compton was lbw to Kabir Ali as he deserved a ton.

"The discipline of the Lancashire bowlers was shown by only eight extras in a score of over 300, impressive work on what must have felt like a long and hot day in the field."

"This was Somerset's day, thanks largely to a stand of 193 between Alviro Petersen and Nick Compton, but Lancashire stuck to their task well and bowled with discipline throughout.

"The two had come together when Marcus Trescothick was bowled and batted with calm determination throughout the afternoon session on a pitch which maybe is not quite as good as a score of 312-3 would suggest.

"Compton was eventually undone by a quicker ball from Kabir Ali, but by then the runs were on the board, and important runs they may prove to be - weather permitting."