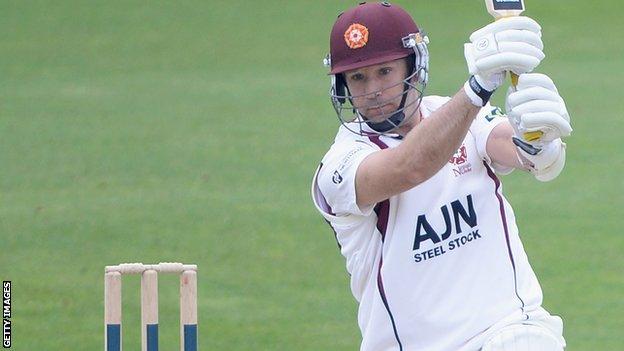 Northants had the better of the opening day against Yorkshire as 17 wickets fell at Northampton.

James Middlebrook (70) and Stephen Peters (27) shared a 44-run opening stand to kick off the Northants reply.

But once Peters fell the hosts lost regular wickets, Jack Brooks taking 4-41 to leave them 191-7 at stumps, a useful lead of 55.

Northants, who are bottom of Division One and without a win in their opening five matches, will now be hoping to build a more significant advantage on the second day.

Having won the toss and elected to bowl, they placed the visitors under immediate pressure from the start, with opener Adam Lyth falling for a duck.

And Butler, supported by Muhammad Azharullah (3-14) and Maurice Chambers (2-23) tore through the Yorkshire batting order to skittle them for just 136, Australian batsman Aaron Finch's 34 their highest score.

However, after building a solid foundation with opening partner Peters, Middlebrook was the only Northants batsman to pass 50 as their reply stuttered.

But Ben Duckett (19 not out) and Butler (13 not out) both chipped in at the end of the day to see the hosts to the close comfortably ahead and with three wickets still remaining.

"This was a marvellous day's cricket at Wantage Road where Northamptonshire were in the ascendancy for much of the day, which only finished at just before 7.30pm thanks to a delayed start, the fall of 17 wickets and even a pause for bad light.

"Northants won a good toss to win on a helpful pitch in cloudy conditions. All four bowlers used bowled with accuracy and tied down a Yorkshire line-up shorn of Gary Ballance and Joe Root. Ian Butler was the pick with four wickets with good support from Azharullah with three.

"Yorkshire were also without Ryan Sidebottom, but they didn't miss him when Jack Brooks took the first four wickets to fall.

"Northants were 10 in front when the players were called off for bad light at 6.15pm. When they returned, Northants added 45 off 44 balls for the loss of Andrew Hall and Yorkshire will wonder why umpires Nick Cook and Peter Hartley took the players off. Certainly the home side were happiest to come off the field, with a lead of 55."