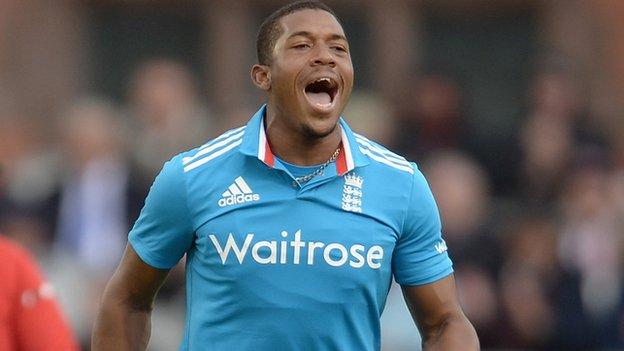 Chris Jordan is "ready-made" for international cricket and should be in England's starting XI for the first Test against Sri Lanka in June, says former spinner Graeme Swann.

The Sussex seamer, playing only his 11th ODI, was named man-of-the-match for the second time in the series.

"He's put both his hands up in the air," Swann told BBC Radio 5 live.

"That was a right good hammering - a perfect comeback for England. We've seen a game done and dusted in three hours - it's remarkable. When you think that England were bowled out so quickly at Durham.

"You won't learn a massive amount about England's one-day cricket from this performance, but you learn about individuals like Chris Jordan."

England dismissed Sri Lanka for 67 then chased down the target in 12.1 overs to move 2-1 ahead in the five-match series.

When asked if Jordan, 25, should start the first Test against Sri Lanka at Lord's, which starts on 12 June, Swann replied: "A thousand per cent yes. He looks ready-made for international cricket."

Swann, who took 255 Test and 79 one-day wickets for England, added: "He looks confident, he looks buoyant and vibrant.

"He's a definite candidate for that first eleven."

Jordan, who returned the best one-day figures by an England bowler at Old Trafford, said the side were determined to make amends after suffering their heaviest home defeat in one-day internationals on Sunday.

England were bowled out for 99 as they were beaten by 157 runs in the second ODI at Chester-le-Street.

"After Durham, we had a really good chat as a team," said Jordan. "We were hurting, not just because we got beat but the manner in which we were beaten.

"We really wanted to put it right today, and we did so. We were surprised at how quickly we won but we're happy.

"Playing international cricket fires me up and it was nice to get one over on them."

England bowling coach David Saker told Sky Sports: "Chris Jordan is the ultimate professional - the way he prepares for the game and the way he looks after himself.

"He always wants to get better - and he is getting better. He's been a real find for us. On his performances so far, he is a Test cricketer."