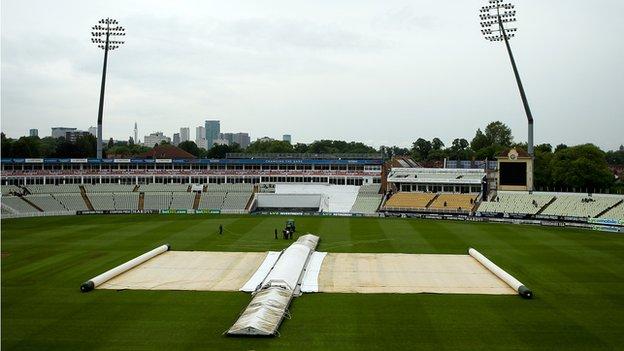 Warwickshire's County Championship game with Somerset predictably ended in a draw after rain prevented any play on the final day at Edgbaston.

The Bears, just six runs shy of a third batting bonus point, left it as late as possible before calling it off.

But a mid-afternoon inspection (15:00 BST) confirmed that there were no further prospects of any play.

Both teams take nine points from the fixture, moving unbeaten Somerset up to second in the Division One table.

Somerset, who trail leaders Middlesex by 10 points with six games gone, are not in action again until Sunday when they head to Manchester for their next Championship assignment, the scheduled four-day meeting with Lancashire.

The Bears' next Championship game is also against Lancashire, starting on Sunday week (8 June) at Edgbaston but, before then, they have three T20 Blast matches to negotiate.

They meet Lancashire at Old Trafford on Friday night (18:30 BST), before moving on to play Leicestershire at Grace Road this Sunday (14:30 BST), then meeting Durham at Edgbaston on Friday, 8 June (18:30 BST).