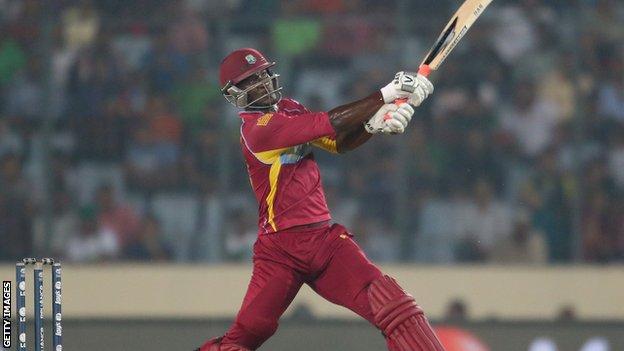 Sammy will join Glamorgan until the start of the Caribbean Premier League in July.

The 30-year-old will play in the first home match of Glamorgan's campaign against unbeaten Sussex on Friday.

"Darren's skills with bat and ball have delighted crowds all around the world in Twenty20 competitions," Glamorgan chief Hugh Morris said.

"We're delighted to welcome him to Glamorgan."

Sammy has just finished playing for Sunrisers Hyderabad in the Indian Premier League, whom he captained, and is one of the world's most powerful hitters as well as offering lively medium-paced bowling.

Morris added: "His leadership skills and qualities are something that's definitely going to benefit the team.

"It'll be for a month or so - we're hoping it will be for six games. That's nearly half the season.

"Four of those games are at home on Friday nights as well."

Glamorgan head coach Toby Radford coached Sammy during his days as an assistant for West Indies.

Radford said: "Darren is a top quality T20 player and a fine addition to our dressing room, because he brings with him experience at the highest level.

"Darren was a leader on and off the field during my days with the West Indies, so it will be great to work with him again at Glamorgan."

Sammy has appeared in 38 Tests, 111 one-day internationals and 52 international Twenty20 matches for the West Indies.

In October 2010 he became the first cricketer from St Lucia to be named West Indies captain, leading the Caribbean side to their first piece of international silverware for many years as they beat hosts Sri Lanka in the 2012 World Twenty20 final.

Sammy has a Test Match hundred for West Indies to his name, recorded against England in 2012 and he remains their captain in the shortest format, leading them to the semi-finals in the 2014 World Twenty20 in Bangladesh.