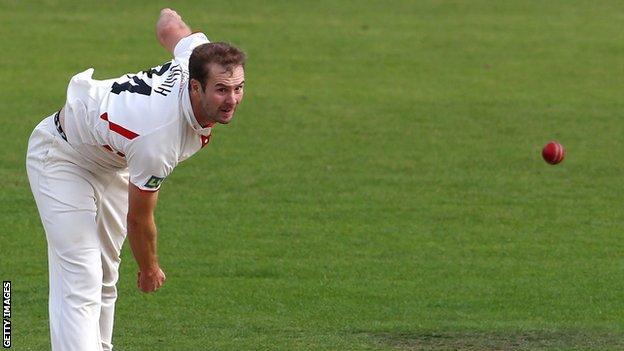 Tom Smith's five wickets kept Lancashire in control at Headingley despite a late Tim Bresnan burst that kept Yorkshire just about in touch.

Bresnan nudged the England selectors with an opening seven-over spell of 3-9 as the visitors limped to 48-3 in their second innings, 130 runs ahead.

Earlier, the hosts could only muster 243 in their first innings, with Smith (5-49) ensuring Lancs a lead of 82.

Adam Lyth hit 50, while skipper Andrew Gale was left stranded on 95 not out.

Gale batted for nearly three hours and struck 13 fours in his 113-ball knock before running out of partners within sight of his second Championship century of the summer.

Smith, who now has 20 wickets, claimed his best figures of the season so far and his second five-for in 2014 after his 5-53 in Lancashire's first match of the campaign against Nottinghamshire.

After making 54 in the first innings, Smith will try and set up victory for the Red Rose when he resumes the final day unbeaten on five alongside Steven Croft (23 not out), after Paul Horton, Luis Reece and Karl Brown were all fired out by Bresnan.

"This is turning into an tremendous Roses battle between these two old rivals and hopefully the weather won't intervene.

"Led by the excellent Tom Smith, Lancashire are in charge of a game at the end of the first innings for the first time this season.

"Smith looks like he's hitting the form of his career - he's now taken 20 wickets for the season and scored close to 400 runs.

"Yorkshire captain Andrew Gale was left stranded on 95 not out, having originally been given out caught down the leg side for 29, before Umpire Peter Willey changed his mind and called him back with Gale clearly unhappy with the decision.

"The White Rose aren't title favourites for no reason, they came storming back into the game thanks to three quick wickets from Tim Bresnan, setting it up beautifully for Wednesday."