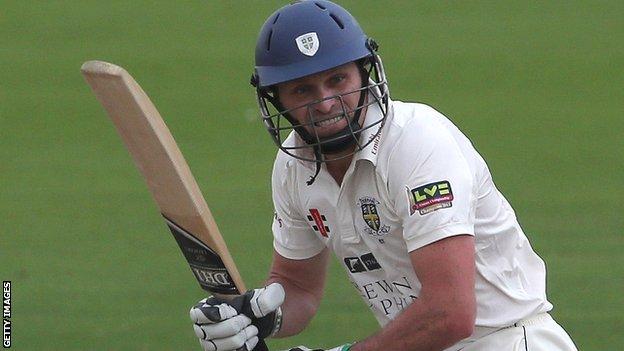 Gordon Muchall scored his first ton for three years as Durham had the better of day three against Nottinghamshire.

England's Stuart Broad, on his return from a knee injury, remains wicketless, conceding 68 runs from 16 overs.

But with the first Test against Sri Lanka a little over two weeks away, Broad was able to get some significant overs to his name ahead of the game at Lord's.

After the morning session was lost to rain, Durham progressed at pace in the 39 overs before tea, adding 175 runs for the loss of one wicket.

Keaton Jennings, who was dropped twice on day two, moved from an unbeaten 24 overnight to 40, before being caught low down by wicketkeeper Chris Read off Andre Adams.

Muchall was then joined by Stokes, playing his first match since breaking his wrist in March.

The pair scored at more than four an over in their 133-run partnership, during which time Muchall reached his first ton since May 2011 - when he made 175 against Worcestershire at New Road.

Stokes hit four fours in six balls to accelerate to his half-century, but was well caught by a diving Michael Lumb at long-on off Samit Patel just after tea.

Paul Collingwood eased his way to 36 not out by close with two sixes and three fours, while Muchall, who was dropped in the slips on 86, has hit 23 boundaries in his 189 balls at the crease so far.

"That Durham dominated most of the 58 overs of play is, by and large, immaterial.

"This match will end up as a draw with more bad weather forecast for the final day.

"Whilst the honours went to Gordon Muchall and co, Notts gained a bowling point and Stuart Broad was able to get some bowling miles under his belt.

"The day was grey, wet and miserable, but thankfully the cricket wasn't."

"I didn't expect to see a single ball bowled on day three with the weather forecast suggesting we should be building an ark.

"Credit to the groundstaff for getting us going after lunch and the fact the floodlights allowed for 58 overs.

"And credit too to Gordon Muchall. It is great to see him building such a big score and in such quick fashion against an attack boasting five Test bowlers.

"It was nice to see Ben Stokes looking comfortable after two months out with a broken wrist. That will not have been missed by the England selectors."