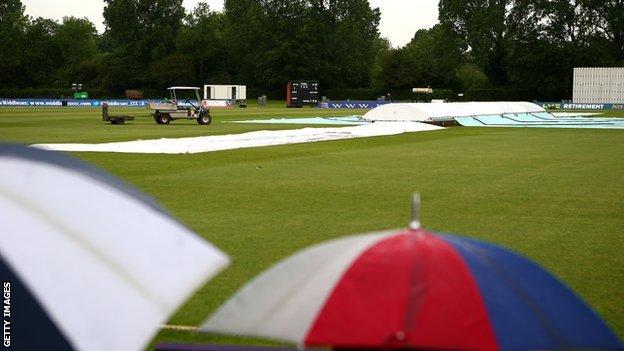 Day two of Middlesex's match against Sussex at Northwood was completely washed out by rain, meaning a ball is still yet to be bowled in the contest.

Umpires Steve Garratt and David Millns called the day's play off at 13:15 BST because of a wet outfield.

Middlesex sit top of Division One having won all three of their previous home Championship games this season, while Sussex are fourth.

"Play has been abandoned for the day at Merchant Taylors' School because of the wet outfield, meaning we are yet to see a ball bowled in this game.

"The rain has been much lighter and less persistent today but the ground needs time to dry out.

"More rain is forecast over the coming days and we may only see a scramble for bonus points, at best, as surely time has run out for either team to force a victory."