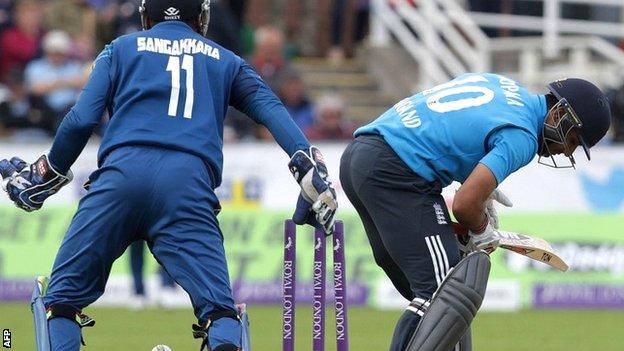 Captain Eoin Morgan said England's batsmen could not have played any worse after they slumped to a 157-run defeat by Sri Lanka at Chester-le-Street.

England were dismissed for 99 to suffer their heaviest home defeat in one-day internationals in terms of runs.

"It was just terrible throughout. It was as bad as we can bat," said Morgan.

"It was one of the worst performances I've been a part of for England. I can't explain why we played that badly."

Morgan top-scored with 40 but the next highest by an England batsman was 12 as they were bowled out in 26.1 overs.

It was their their lowest ODI total in England since 2001 and the fifth heaviest defeat in their history.

Morgan was captaining the side in the absence of Alastair Cook, who was ruled out because of groin trouble.

In contrast, England had slumped to 29-4 in the seventh over as seamer Nuwan Kulasekara claimed 3-9 in his first five overs.

"It has been a disappointing day - regardless of who is captain," Morgan said.

"We have under-performed massively, particularly with the bat, and it's inexcusable, given the conditions that we're used to playing in.

"The two new balls we did find a little bit tricky but we lost wickets throughout the whole innings.

"We didn't seem to have any partnership of substance throughout and again that made it hugely difficult."

Sri Lanka captain Angelo Mathews said: "We were not sure about our score, we thought it was about par, but the bowlers were excellent again and took early wickets.

"It was cold and it was seaming a lot, Kulasekara is unplayable in these conditions."

The third of the five-match series is a day-night contest and takes place at Old Trafford, Manchester, on Wednesday.