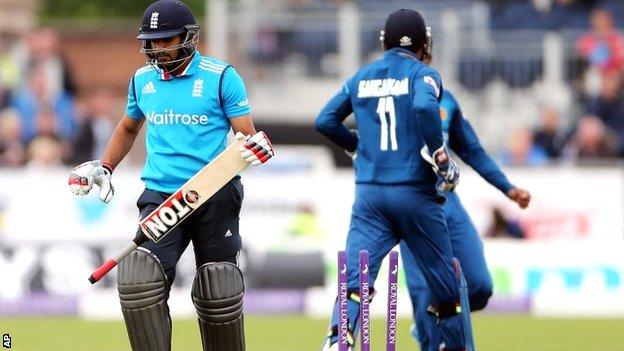 England were skittled for 99 as Sri Lanka levelled the five-match one-day international series at 1-1 with a 157-run win at Chester-le-Street.

Tillakaratne Dilshan made 88 as Sri Lanka posted a respectable 256-8.

Eoin Morgan top-scored with 40 as England were all out in the 27th over, their heaviest ever home ODI defeat in terms of runs and fifth worst anywhere.

As dispiriting as England's innings was, with shades of the disastrous Australia tour last winter, Sri Lanka were rewarded for some disciplined batting.

They had been huddled together for warmth under several layers in the dressing room after being put in by Morgan, who was captaining England after Alastair Cook withdrew because of groin trouble.

And although Lahiru Thirimanne cut loose on one occasion to heave Harry Gurney over mid-wicket for six, only 33 had been scored when James Anderson had the left-hander smartly caught at second slip by James Tredwell off the final ball of the ninth over.

After Anderson's impressive opening spell of 1-14 from six overs, Dilshan compiled a crucial 96 from 132 balls with Kumar Sangakkara, content to play in orthodox fashion on a slow, seaming wicket.

It was not until he reached his 35th half century from 63 balls that Dilshan, in his 279th ODI, unveiled his trademark scoop shot and it was 129-1 in the 31st over when Sangakkara played an uncharacteristic heave across the line to Tredwell.

That brought in the other Sri Lankan with in excess of 24,000 international runs to his name, Mahela Jayawardene, but he was out less than two overs later, run out by Gary Ballance when going for a third, perhaps thinking Dilshan's cut was going to the boundary.

"England will be bitterly disappointed. I thought they would win because Sri Lanka didn't seem up for it with their woolly hats and gloves, but they were and England have been humiliated. Who do you want to blame? England had no answer and maybe it's just one of those days but you'd say as a fan that it's not good enough."

Chris Jordan enhanced his reputation with a fine delivery that nipped back off the seam to clip Dilshan's middle stump in the 38th over but Gurney, who finished with a commendable 3-59, spilled Ashan Priyanjan in the outfield on five and he went on to hit two sixes in his rapid 43.

Anderson became the first England bowler to reach 250 ODI wickets but Ravi Bopara put down a straightforward catch and 15 wides in the innings helped Sri Lanka surpass the average score batting first on the ground of 234.

That total looked all the more challenging after England lost four wickets in the opening seven overs, with Kulasekara moving the ball sufficiently to cause problems as he claimed 3-9 from his first five overs.

Joe Root lost his off-stump to the mercurial Lasith Malinga and when Ravi Bopara was attempting to build a partnership with Morgan he was deceived by a sharply turning Senanayake delivery.

Jordan, whose powerful hitting helped England to 60 from the final four overs in the first match at The Oval, was trapped on the crease by Senanayake to leave England on 63-7 and in danger of failing to reach their previous ODI lowest total of 86.

Morgan, one of only two England players to reach double figures, struck two defiant sixes to at least prevent that ignominy, but with the dark clouds that frequently threatened rain failing to produce a stoppage of any kind, he was ninth out.

Sri Lanka completed a resounding victory and attention now turns to Old Trafford, Manchester, for the third match on Wednesday.