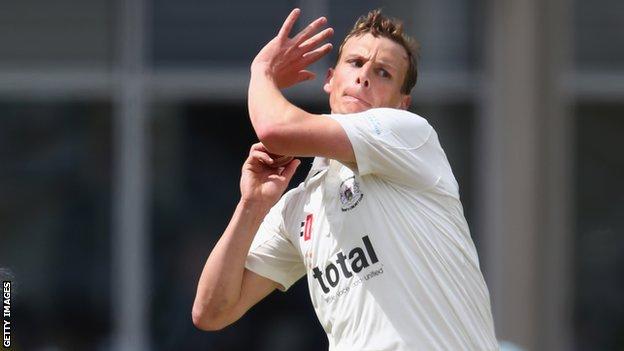 Derbyshire struggled to 166-6 as Gloucestershire fought back on a rain-reduced day at the County Ground.

Paul Borrington (42) and captain Wayne Madsen (33) both got starts to guide the hosts to 78-1, but wickets then fell regularly with only Scott Elstone (36 not out) providing any resilience.

Will Gidman (2-30) and Benny Howell (2-28) shone for the visitors while in-form James Fuller also took a wicket.

Derbyshire, who currently sit bottom of Division Two, are winless this season.

"A day of two halves. After Gloucestershire won the toss and asked Derby to bat on a fresh looking wicket they had just taken the wicket of Stephen Moore at the interval.

"With overnight and morning rain, play did not get underway until 1.45pm and only 71 overs were available for play.

"It was the run out of Paul Borrington that was the catalyst of the collapse.

"From a position of strength, Derbyshire lost five wickets for 75 to end the day behind the game as the Gloucestershire bowlers kept things tight and waited for mistakes."

"Gloucestershire had a productive evening session when their bowlers found some extra zip that was lacking earlier on.

"They will probably be the happier of the two sides with batting set to be easier on a drier pitch."