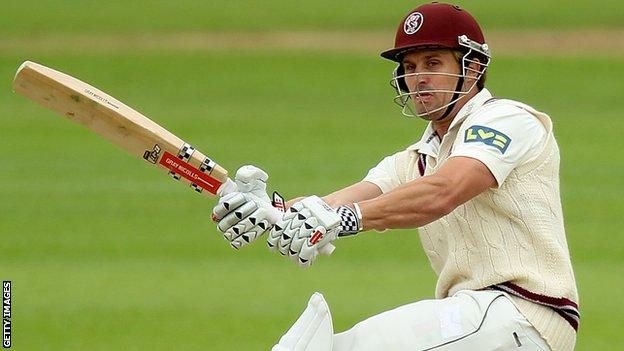 The pair shared a fourth-wicket partnership of 132 as Compton and Hildreth both hit 72 not out to see the visitors to 237-3 at stumps.

After the start was delayed until after lunch because of a wet outfield, captain Marcus Trescothick made 53.

Keith Barker, Rikki Clarke and Jeetan Patel picked up a wicket each.

Although conditions were dry at the scheduled start time, three days of heavy rain in Birmingham had left parts of the ground waterlogged and so play did not get underway until 13:30 BST.

Captain Trescothick, who hit a match-winning 133 in his side's last game against Durham, continued where he had left off, striking six fours and two sixes, but he was bowled by Clarke just when he looked set to go onto another big innings.

The visitors were briefly wobbling at 105-3 when Alviro Petersen was caught by Clarke off Patel following a reckless shot, but Compton and Hildreth batted with assurance for more than two hours to turn the game on its head.