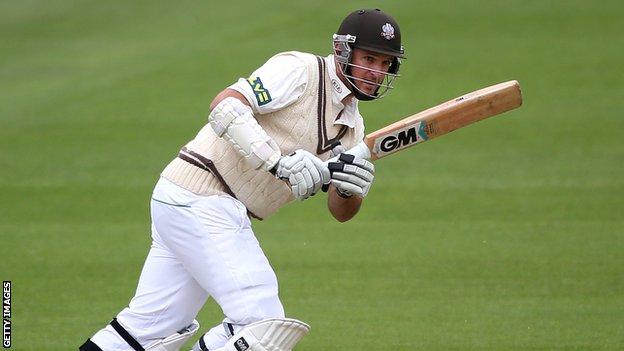 Surrey captain Graeme Smith will miss the rest of the season after fracturing his knee and will be replaced by fellow South African Hashim Amla.

Former South Africa batsman Smith, 33, who made 117 Test appearances, played in Sunday's T20 Blast victory at Somerset, but is now to return home.

Test batsman Amla, 31, will join up with Surrey for the County Championship trip to Essex, starting this Sunday.

Smith's position as captain will be filled by Gary Wilson for that game.

The ex-South Africa captain, who retired from international cricket in March having played in 197 one-day internationals and 33 Twenty20 internationals, averaged 32.87 for Surrey in Division Two this season.

However, Surrey director of cricket Alec Stewart revealed he had been playing through the injury in the last few weeks and Amla has been brought in as cover for the next month.

"He's done his very best to play through a lot of pain. He's taken a lot of painkillers to get through the last 10 days or so," Stewart told BBC London 94.9.

"But the scans showed the fracture and it was non-negotiable, he had to go for this operation.

"You have to accept it, and the good thing is we've been able to get Hashim Amla over at short notice. Cricket South Africa have been excellent with their dealings and we'll have him for the majority of June and then we'll see where we are after that."

Amla, who has made 76 Test appearances for South Africa, returns to The Oval after playing the final six Championship matches last summer as Surrey were relegated to Division Two.

"He's a world-class player," Stewart said. "I'm trying to get good overseas players in here who can make a difference out on the field and in the dressing room.

"Hash knows the club, he thoroughly enjoyed being here last year. Hopefully he will score runs in the four to five four-day games he's available for, as well as the four Twenty20 games."