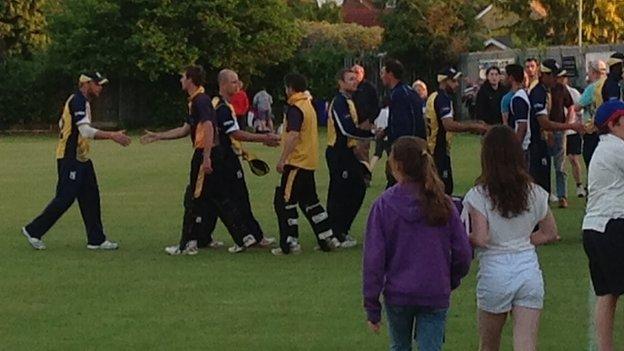 Chasing a Bears total of 201-9 at Cricket Meadow, Shropshire made just 104-8, only tailender Gurman Randhawa offering any real resistance with 33.

But Oliver told BBC Sport: "It's no disgrace losing to a team with performers of that calibre."

He added: "We'd like to have been a lot better. But they came here expecting to win and they did - and the way they played it would have taken something special to get near them."

I have to admit we didn't have much luck

Despite an impressive 63 from Bears opener Will Porterfield, who shared a 69-run second-wicket stand with Jon Webb (33), Shropshire looked to be in the game at the halfway stage, skipper Oliver and Shifnal's Jack Edwards having both claimed a couple of scalps each.

But Rankin and Chris Wright soon got amongst the Shropshire batsmen for a Warwickshire side who had England international Jonathan Trott fielding for the full 20 overs, part of his return following a stress-related condition.

After Wright had got rid of Omar Ali first ball, he struck again in his next over to remove Joe Clarke.

Rankin then removed Shrewsbury duo Tom Cox and Rob Foster in the same over before getting the prize wicket of Oliver, clean bowling the new Worcestershire Twenty20 discovery for 11 with a fast yorker.

"I have to admit we didn't have much luck," added Oliver. "All our good shots went straight to fielders.

"It was a pretty decent yorker. But he bowled very fast. And he's got out better batsmen than me."

From 29-5, there was no way back for Shropshire, James Ralph making 15. But former Yorkshire spinner Randhawa did at least see his side into three figures to last out for the full 20 overs.

And spirits ought not to be badly affected ahead of Sunday's key final group game for Shropshire in the Knockout Trophy against Cumberland at Cockermouth.

"We lost by more than 100 runs against Cheshire last Sunday," added Oliver. "We lost by almost 100 tonight. And we certainly don't want to be doing that on Sunday. It's a long way to go without coming back with any points."

"It was a very professional performance against a side full of very good players," said Warwickshire director of cricket Dougie Brown. "We maybe lost our way a bit in our innings, losing a few too many wickets after being in a really strong position after 12 overs.

"But I thought we were exceptional with the ball and in the field.

"You don't just have to be a Shropshire lad to struggle against Boyd Rankin," added Brown.

"He's back to full form and fitness and, when that happens, he's a terrific asset for any team. He played the other day against Gloucestershire and bowled ridiculously quick. He was terrifying."