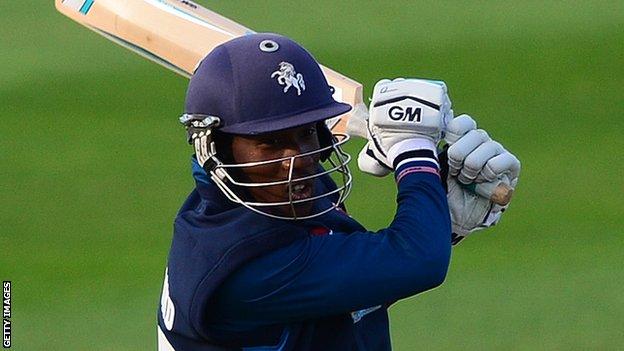 Kent blasted 164-5 in just 13 overs as they thumped Somerset by 42 runs in a rain-affected game at Taunton.

Daniel Bell-Drummond smashed 59 off 30 balls and Rob Key made a quickfire 46 before big-hitting Darren Stevens powered his way to 47 off 20 balls.

The hosts collapsed to 39-3 before Craig Kieswetter (40) and James Hildreth (58 no) opened their arms.

But, with the light fading quickly and run rate required climbing above 20, Somerset could only muster 122-5.

Home skipper Marcus Trescothick may have regretted his decision to bowl first as Bell-Drummond and Key shared an opening stand of 85 in just 6.2 overs, the Kent batsmen hitting 20 fours and six sixes in total.

Stevens (2-14) and Australian Test paceman Doug Bollinger (3-36) then bowled tightly, aided by some fine catches, to make sure Somerset were never in with a chance as the match finished in near darkness.