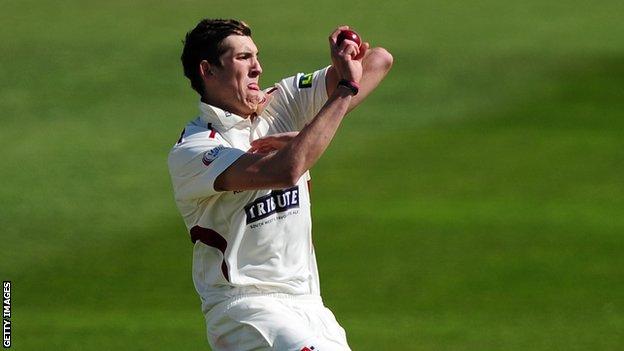 Craig Overton took the third five-for of the match to put Somerset into a strong position at home to Durham.

But three quick Overton [5-63] wickets of Richardson, Mark Wood and Jamie Harrison had them struggling, and they were all out for 326 when Chris Rushworth went for a career-best 46.

The opening pair looked in no mood to amble towards the target, with captain Trescothick's knock coming from 75 balls, including 11 fours.

The game had looked in the balance early on the third day, with Mark Stoneman and Richardson frustrating their hosts, but the former was finally caught behind off Overton just three short of a century.

Richardson continued unflustered, reaching his second ton of the season off 202 balls, but partners came and went before he himself was bowled by Overton.

Wood and Harrison soon departed in successive balls to the same bowler to leave them 275-8.

And despite Rushworth's best efforts, Scott Borthwick - who batted despite a finger injury - was the last man standing as Overton matched the exploits of Alfonso Thomas and Wood in taking five wickets in an innings during the match.

"Having worked hard to get back into this game, it seems all of Durham's work may have been undone in the final 23 overs of day three.

"Chasing 248 to win - and with an iffy weather forecast for the final day - Marcus Trescothick and Johann Myburgh set about the bowling with determination and aggression. Trescothick hit 11 fours on his way to the 107th half century in first-class cricket. The bowling was poor and there for the taking.

"Durham really need to up their game on the final day because if the weather does hold this could turn into a procession. They are without the bowling services of the injured Scott Borthwick too, who has a cracked finger.

"Earlier Michael Richardson made 116 for the visitors and is 11 runs short of 500 in the Championship this season. Mark Stoneman made 97 and there was a career-best 46 from Chris Rushworth."