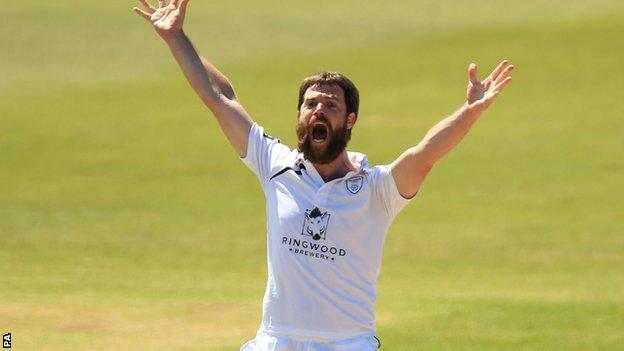 Hampshire went top of Championship Division Two as they swept to a 278-run win over Leicestershire at Grace Road.

The visitors declared on 338-9 and seamer Kyle Abbott then removed Angus Robson and Ned Eckersley for ducks.

Niall O'Brien and Rob Taylor departed in the space of three balls as the home side struggled to lunch on 71-6.

Greg Smith (39) was lbw soon after the restart and they were eventually all out for 96, with left-arm spinner Danny Briggs taking 4-13 and Matt Coles 3-24.

Hampshire have won four of their last eight Championship matches against Leicestershire, after failing to win any of the preceding seven.

It was unbeaten Hampshire's third win from six games this season, while Leicestershire suffered their first defeat after three draws.

Chasing down a target of 375 was always a remote prospect for the home side on the final day, after Hampshire batted on for three and a half overs to add 32 runs to their overnight score.

The declaration came when Coles was stumped off Jigar Naik for 83, a 77-ball innings that featured a six and 13 fours.

Losing Robson and Eckersley with only 21 on the board was a body blow for Leicestershire, but they had few excuses for a poor display in which Ramnaresh Sarwan (15) was the only batsman apart from Smith to reach double figures.

The end came when Briggs bowled Anthony Ireland and Nathan Buck in successive overs to end his first Championship appearance of the summer on a high note.

"That Leicestershire should ultimately be beaten so comprehensively was hugely disappointing, not so much for the manner of defeat as for the fact it brought to mind some of the capitulations that characterised their performances last season.

"In that context, it was not much consolation that the batsmen did not throw their wickets away with rash shots. Instead, they were unable to cope with accurate bowling and the odd delivery that kept markedly low.

"What does provide consolation, however, is that it was the county's first bad day in 16 of Championship cricket this season, and as head coach Ben Smith pointed out, they went 'toe to toe' with the best side in the division for the first three days. What is vital is that the Foxes do not allow the setback - and it was unquestionably a painful one - to affect them."

"Hampshire coach Dale Benkensten said he wanted his side to bat on on the last day because he did not want to spend much of day four wondering if they were going to lose.

"But that thought could not have lasted long in his, or anyone else's mind, as the home side surrendered rather meekly.

"There was time for Danny Briggs to remind everyone that he can bowl in four-day matches, and for Matt Coles to show his undoubted talent with a Hampshire-best 83 off 77 balls in the second innings followed by 3-24."