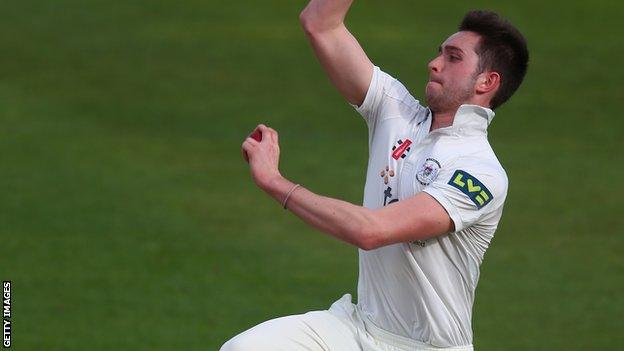 Gloucestershire moved off the bottom of County Championship Division Two with a 290-run victory over Kent.

Kent began day four at Nevil Road still 417 behind on 165-5, but Ben Harmison and Sam Billings (67) frustrated the hosts and extended their stand to 139, before Matt Taylor bowled Billings.

Adam Bell went to Taylor's (3-55) next ball, as Harmison reached his career-best score seemingly in vain.

But shortly after Harmison fell for 125, Kent were all out for 291.

Harmison and Billings had held up Gloucestershire's charge towards victory on day three, after the hosts left them needing an unlikely 582 to win before their top-end batsmen struggled.

But when Billings and Bell fell in successive balls from Taylor, defeat looked inevitable for the visitors.

Mitchell Claydon then went for 15 caught at mid-on, before Harmison was caught by Michael Klinger after a knock which included 22 fours and Taylor took the final wicket of Doug Bollinger as Gloucestershire secured their first win of the season.

"Gloucestershire were always going to have to be patient to finally finish off Kent, and their first win of the season duly came at lunch.

"Matthew Taylor finally put the game out of Kent's reach when he got two wickets in two balls, but it was the castling of the visitors' top order in both innings that saw Gloucestershire always in control.

"Gloucestershire go on the road now to Derbyshire and Leicestershire, and with the Division Two table going to be tight, captain Michael Klinger says he will have a clearer vision of how this win will have kick started his side's chances of success in two weeks' time.

"However, he will have to do without Gareth Roderick, as the wicketkeeper, who scored two half centuries and took five catches in the first innings, has fractured the same finger that kept him out for the first six weeks of the season."

"This was a big step back for Kent after a win over Surrey and the best of a rain-induced draw against Derbyshire.

"Gloucestershire's bowling was zesty and accurate, and their big second innings total owed a lot to the freedom given by the lead their seamers set up.

"Kent's top-order capitulation in the second innings made defeat all but certain, but Ben Harmison's ton showed what could be done on a pretty forgiving pitch, his patience rewarded with a career-high score.

"Sam Billings' continued growth as a batsman will delight Kent's captain and coaches alike, but many supporters will come out of the game wondering if the side has the steel necessary to push for promotion."