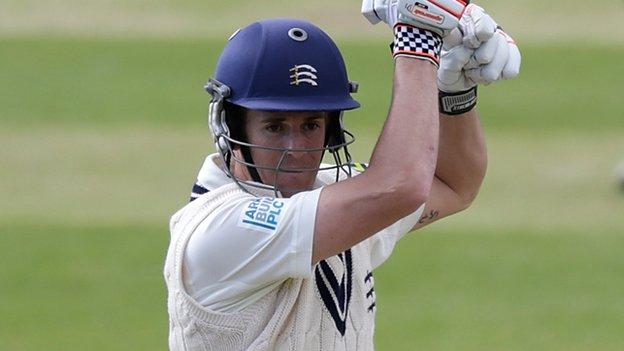 Middlesex batsman Neil Dexter made a career-best 163 not out against Northants at Wantage Road to help his side move into contention for a fourth win in six County Championship games.

Resuming on 262-3, with Dexter on 35, the former skipper reached his century with the last ball before lunch.

Joe Denly made 70 and Toby Roland-Jones hit 60, his highest first-class score, as Middlesex then declared on 543-7.

Northants then reached 88-4 at the close, still trailing by 172 runs.

Roland-Jones, fresh from his career-best haul of 6-55 in the first innings, took another two wickets and will have a chance to beat his best match analysis of 10-118, taken against Worcestershire at New Road in 2012.

But the prize scalp was Matt Spriegel with the last ball of the day for 38 - a rare victim for Denly.

It looks as if only the weather will prevent Middlesex claiming the victory they need to climb above Yorkshire and Sussex and go top of Division One on Wednesday.

A fourth defeat in six games would leave Northants already 20 points adrift of safety at the bottom of the table with almost a third of the season gone.

"Another tough day for Northants, who looked demoralised when Middlesex completed their innings 260 in front. Their members will be fearing the worst on the final day, with four second innings wickets already gone,

"Nothing is going the way for the county at the moment, as was shown by the way Matt Spriegel was adjudged to have been caught off his own boot off the final ball of the day.

"Just like Derbyshire last season, Northants are struggling to adapt to Division One, with three successive defeats behind them and a fourth likely."

"Middlesex enjoyed as emphatic a day as they could possibly have dreamed of at Wantage Road as they gave another glimpse of their potential this season.

"A wicketless morning session saw Neil Dexter move to his first century of the campaign and Joe Denly return to form with his first fifty of the year. The pair batted patiently, wearing down the Northamptonshire attack who took the second new ball at the start of the day.

"The onslaught in the afternoon was in stark contrast to anything we'd seen on this sluggish pitch. The bowling of Toby Roland-Jones, who suffered from injuries last year, could be the difference between a mid-table finish and a title challenge this year. And even further encouragement for Middlesex is that their sheer dominance has been achieved without Steven Finn, rested after taking 29 wickets already this season."