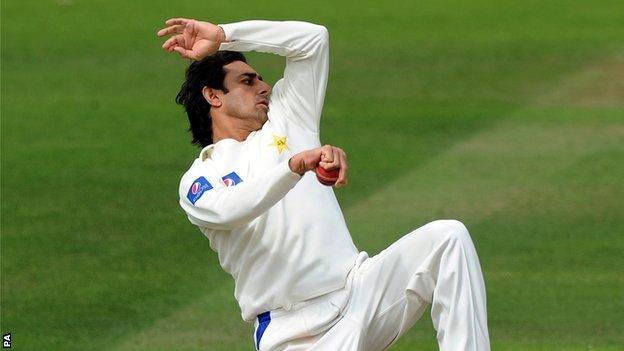 Resuming on 52-2, Essex earned a batting bonus point as they were bowled out for 203, Ajmal who had taken two wickets the night before, ending with 6-75, his best for Worcestershire.

But Worcestershire then struggled to add to their first-innings lead of 88.

Only skipper Daryl Mitchell, the country's leading run scorer, resisted for the home side, with 38.

That helped take his personal run tally for the season to 667 in five Championship matches at an average of 111.16.

But it leaves his side with a lead of just 193 going into the third day which, depending on the weather, could now prove to be the final day.

"Worcestershire's batsmen, it seems, have thrown away a good position. Against a threadbare Essex attack, with two bowlers off the field at one time, they crumbled.

"Monty Panesaar got the ball to turn but, as in the first innings, one or two of the Worcestershire batsmen seemed to be still in T20 mode from the weekend.

"Saeed Ajmal was once again the threat after Greg Smith and Jaik Mickleburgh had enjoyed a trouble-free first hour.

"Essex were then rescued by Graham Napier and Jesse Ryder, who went to a superb catch at cover point by Tom Fell and we were treated to two superb leg-side stumpings, one by Ben Cox and one by James Foster."

"Essex will be frustrated at throwing away a strong start but Jesse Ryder was batting impressively when his innings was cut short by Fell's superb catch.

"And the last-wicket stand of 38 between Graham Napier and Monty Panesar is starting to look significant.

"Essex tried to attack Saeed Ajmal, with mixed results, but Worcestershire were largely strokeless against Panesar and that contributed to their problems.

"Essex will want to repeat their positive approach on day three and have a real chance but a significant top order innings will be needed."