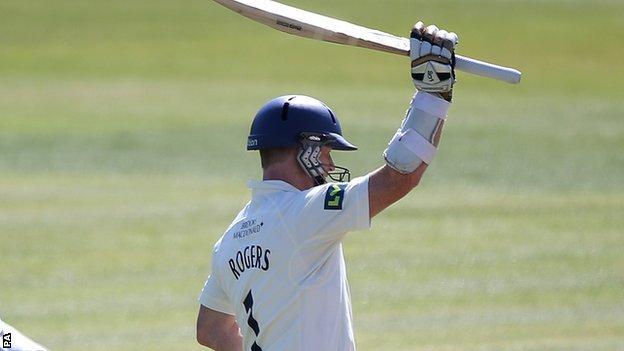 Middlesex ended day two in a position of dominance against Northants after another ton from skipper Chris Rogers.

Toby Roland-Jones took one of the two remaining Northants wickets to end with a career-best 6-55 as the hosts, 251-8 overnight, were bowled out for 283.

Rogers in the runs again

The Australian was well supported in a second-wicket stand of 190 with Dawid Malan, who made an equally dogged 92, to cut the deficit to just 21.

Rogers, who offered a difficult chance to David Sales at second slip, and Malan then had a couple of moments of concern against the new ball.

But, after most of their best work was done in a wicketless second session that drained the hosts under the relentless sun, Rogers completed his second hundred of the summer just after tea.

The visitors then made further inroads on the Northants score late in the day thanks to an unbroken 36-run stand between Neil Dexter and Joe Denly.

"A day of toil in the field for Northants, who took three wickets all on a day on a pitch which, while offering some variable bounce, is much more helpful to the batsmen than the bowler.

"The difference in the two sides has been the dogged accumulation of runs by Chris Rogers and Dawid Malan.

"Where Northants' batsmen too often sold their wickets cheaply, Rogers was cautious and steady, content to grind rather than dazzle.

"Thunderstorms are forecast on Tuesday afternoon and, without them, Northants are facing another awkward final day in a tough start to the Championship."

"Northants' errors in judgement with the bat on day one were further magnified by the judgement of the Middlesex batsmen.

"Having lost Sam Robson to a loose drive, which left him with only one had on the bat, there was a chance that the visitors were going to fall into the same traps.

"Chris Rogers survived some early scares, including a very good shout for lbw with the first ball of the innings, to show off his shot selection on the way to a fine century. But he was undone by the slow nature of the pitch as he tried to force matters and used to his feet to Matthew Spriegel only to be lose his middle stump.

"Dawid Malan was unlucky to chip to midwicket on 92, the second successive innings that he has reached that score."