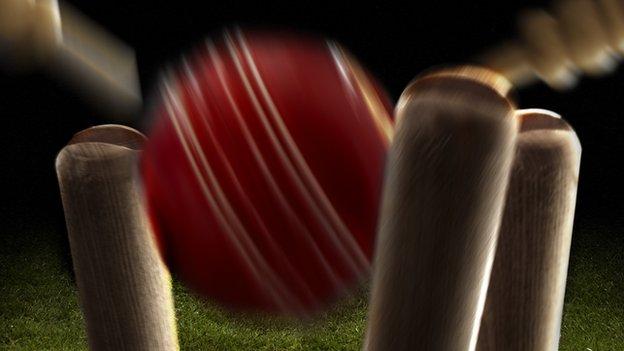 Until yesterday you would have been hard pushed to find too many people - even in his native New Zealand - who had heard of Lou Vincent.

A journeyman Twenty20 specialist, he retired from international cricket in 2007 after playing 23 Tests and 102 one-day internationals.

But Vincent could yet become a household name as the man who lifted the lid on match fixing and corruption in the sport.

For months now he has been working with the International Cricket Council's Anti Corruption Unit (ACSU). On Friday, details of some of his evidence were leaked to two newspapers, the Daily Telegraph and Daily Mail.

The reports say Vincent has claimed at least 12 games he played in around the world were involved in some sort of match or spot fixing - where passages of the game are rigged by illegal bookmakers.

The newspapers also claim three of those matches took place in England - Lancashire v Durham in 2008 and two Sussex matches in 2011, one against Kent and another against Lancashire. Vincent played in all three of those games. There is no reason to suspect any other players or officials involved.

The Kent v Sussex match has already been investigated by the England and Wales Cricket Board (ECB) and, although no action was taken, it is understood evidence provided by Vincent to the ECB back in 2011 was then passed on to the International Cricket Council (ICC).

The ECB is now seeking urgent discussions with the ICC before weighing up what action - if any - it should take.

The papers report that Vincent told the ICC he was offered money and in one case a woman to help fix matches. He has reportedly named six other players involved in fixing including one very high-profile international star who cannot be named for legal reasons.

It is all highly embarrassing for a sport which simply cannot shake off the persistent claims of cheating.

It is also humiliating for the ICC that the details of the case have been leaked.

But then, this being cricket, this story is as much about politics as it is about possible corruption.

For some time now there has been frustration from some countries at the lack of action from the ICC on Vincent's match fixing allegations.

While it is the first time we are reading about them in detail, they have been around quite a long time and involve matches which took place a while ago.

Many of them, as in the case of the Kent v Sussex match in 2011, have long been suspected as dodgy and have even been investigated.

What the whole of the cricket world is now waiting to see is whether Vincent has made any new and potentially more damaging claims against high-profile players still at the top of the game. The suspicion is that there may be a lot more to come from him.

Regardless of that, the ICC's glacial pace on this investigation has led many at the top of the game to question the effectiveness of the world governing body's anti-corruption team. The ACSU's head, former chief inspector of constabulary Sir Ronnie Flanagan, is under huge pressure.

Flanagan and ICC chief executive David Richardson were in London on Thursday for the start of a 'bottom up' review of the ACSU. Many believe Flanagan will lose his job as the unit is scaled back to give more power to the national cricket bodies like the ECB.

The feeling in some circles is that the national boards are better placed to investigate as much of the fixing claims centre on domestic limited-overs cricket and not international matches.

All of this must in turn be seen in the context of the wider reshaping of world cricket going on with India, England and Australia taking greater control over the ICC.

Whoever is responsible for investigating and prosecuting these match-fixing cases - they remain incredibly hard to prove. Even when illegal approaches are reported it is difficult to be sure that the fix was ever actually pulled off.

It is one of the reasons the ECB is lobbying British MPs to introduce a new act or an amendment to the Gambling Act which would make it unquestionably a criminal offence to accept any inducement to cheat at sport.

In the meantime the ICC knows it must make the most of the evidence Vincent has presented to them. Cricket simply has to get to grips with the problem of match fixing.

But illegal betting in Asia is worth billions of pounds. One study yesterday said criminal gangs had laundered £83bn through illegal gambling.

And with the sport now so financially reliant on the potentially toxic mix of T20 cricket, television money and Indian political dominance - where of course so much of this illegal betting is taking place - it is very hard to be confident that the game will ever be able to get on top of it.