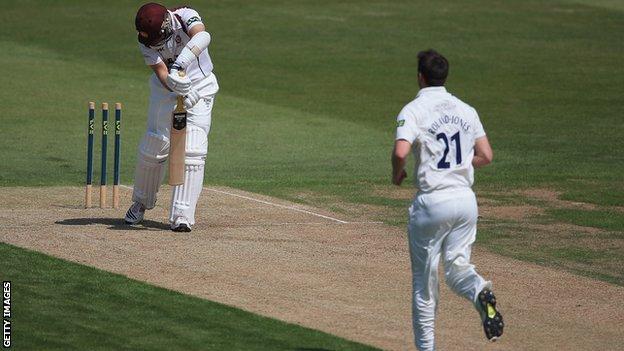 Seamer Toby Roland-Jones took 5-45 as Middlesex reduced Northants to 251-8 at stumps on day one at Wantage Road.

After contributions from Stephen Peters (67) and David Sales (43), the hosts were set at 142-3 before a collapse.

Slow left-armer Ravi Patel struck either side of two wickets from Roland-Jones to reduce Northants to 207-7.

The paceman then trapped Andrew Hall before the newly-promoted side closed with Ian Butler and Maurice Chambers unbeaten on 27 and one respectively.

Peters and Butler were the only batsmen to make their runs at a strike-rate above 50 on a 97-over day of very slow scoring.

Northants, who are winless in the Championship this season, had given themselves a platform to post a strong first-innings total, ending the morning session 87-1 with Roland-Jones' bowling of James Middlebrook the sole trouble for their batsmen.

Peters and Sales then gave their wickets away after lunch. The former picked out Patel at deep midwicket, and the latter drove a wide Tim Murtagh delivery straight to Chris Rogers in the covers.

And Middlesex seized their opportunity, stifling the Northants line-up as Patel and Roland-Jones ripped through them to claim five victims after tea before Butler and Chambers limped to stumps.

"A frustrating day again for Northamptonshire followers as the Tudor Rose county got a platform and their batsmen couldn't build on it.

"On a sun-drenched day, Northants got to lunch for the loss of just James Middlebrook. But the fall of Stephen Peters and David Sales to loose shots when they were well set gave Middlesex hope in the afternoon session.

"Three more wickets followed soon after tea and while the odd ball deviated, not enough Northants batsmen showed the patience and concentration needed to exploit this pitch.

"You can bet your life Chris Rogers and England prospect Sam Robson will fancy their chances when Middlesex bat on day two but, equally, Northants might feel the same about taking on Middlesex's middle order."

"Middlesex will be relieved to have Northamptonshire eight down after losing the toss and finding little on offer from the pitch.

"The hosts gave away too many of their top-order wickets and, despite the defiance that saw them three down at tea, they only had the eighth-wicket partnership to thank for bringing some credibility to the score.

"There is enough in the pitch for batsmen and bowlers but only patience will be truly rewarded, and if the bowlers do stray then the balls are there to be put away.

"Whether the pitch flattens a little more, after the baking heat of the first day, remains to be seen but there is a threat of showers tomorrow that may hamper the visitors' hopes of a more substantial first-innings total."