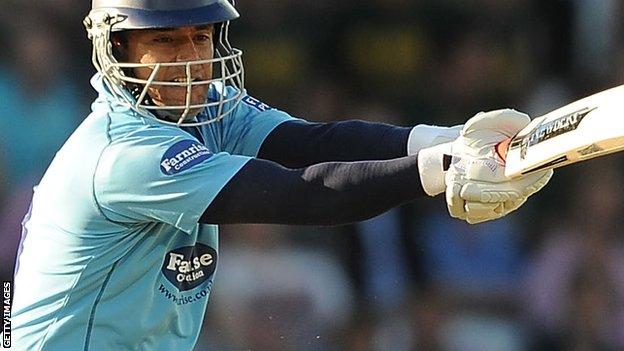 Yasir Arafat hit the final two balls of the match for four as Sussex snatched a dramatic two-wicket win over Surrey.

But with 16 needed off Jade Dernbach's final over, Ben Brown's six gave Sussex hope before Arafat saw them home.

Roy had set the early tempo for Surrey as they batted first on winning the toss as he blasted three sixes and three fours in a 43-ball innings.

Wilson also hit a maximum as well as six boundaries in his 39-ball knock, but Azhar Mahmood (23) was the only other visiting player to get going, although Surrey were gifted six runs for Sussex's slow over rate.

Surrey's bowlers did a good job in keeping it tight for much of the Sussex innings, but their own six-run penalty for a slow over rate proved crucial in the final outcome.

Pace bowler Tom Curran (2-42) was left disappointed after marking his T20 debut with the wickets of Wright, who hit two sixes and six fours, and Ed Joyce.

"Yasir Arafat showed all his experience to guide the Sharks home, although Ben Brown's six over cover point in the same over was the catalyst for an extraordinary finale.

"Sussex head to Lord's in good heart, while Surrey will be wondering how they lost as they head to Taunton on Sunday."