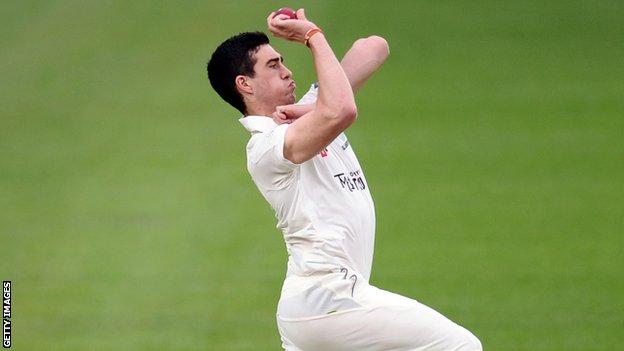 Hampshire moved to the top of the Division Two table by completing a six-wicket victory over Glamorgan.

The Welsh county only added two to their overnight 185-9 before Tom Helm was caught off James Tomlinson (3-40).

Requiring just 67, Hampshire were made to work for their win by 19-year-old seam bowler Ruaidhri Smith (3-38).

He bowled Jimmy Adams for a first-ball duck and later removed Michael Carberry and Liam Dawson in the same over, before Hampshire reached 68-4.

Gareth Rees claimed the fourth wicket to fall, having Will Smith caught for eight at mid-on by Stewart Walters, who had earlier taken a superb diving effort in the slips to send Carberry on his way for 14.

But having passed 500 runs for the season on the second day, James Vince slightly tarnished teenager Smith's figures with three fours in an over to reach 29 not out and end the match.

It was Hampshire's second victory of the summer, to go with three draws, and moved them 11 points clear of Worcestershire at the top.

"What should have been a formality for Hampshire was not quite that, although they never looked like finishing with anything other than the victory.

"The last Glamorgan wicket was taken after just 10 minutes play, leaving a modest total to chase.

"But Ruaidhri Smith, given the new ball to allow Graham Wagg a well-earned rest, responded with three quick wickets.

"It was left to James Vince to restore normality and Hampshire's domination in the match by hitting the same bowler for two consecutive boundaries to complete the six-wicket win that sent them back to the top of Division Two."