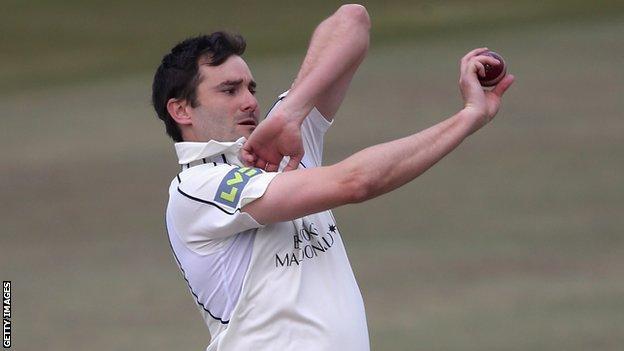 Ashwell Prince and Jos Buttler (50) dug in, before Murtagh snared the latter and Tom Smith in the over before tea.

Prince (86) remained stoic and skipper Glen Chapple (32) helped the newly-promoted side reach 223 all out, which left Sam Robson and Chris Rogers to knock off the 31 runs needed to win.

Middlesex's third win from three home games lifts them to third, an impressive response to their own humbling loss against Warwickshire at Edgbaston in their previous fixture.

And they had looked like dispensing with Lancashire far earlier than transpired. Ireland international Murtagh removed nightwatchman Simon Kerrigan and when Steven Finn struck either side of a Toby Roland-Jones wicket, a result was close.

But South African veteran Prince and Buttler added 117 in over two hours to frustrate the home attack.

Murtagh returned as the afternoon session drew to a close and Buttler nicked to Dawad Malan at slip.

Smith then edged behind for a duck to leave the hosts elated at the match's final interval.

Chapple bludgeoned six boundaries to help force Middlesex to pad up again, but Murtagh got rid of Prince to make it 217-8, and the final two wickets soon followed.

Only a sudden downpour at a sun-baked Lord's could save Lancashire from defeat, but it did not come.

"It's a disappointing loss. We did well on day one having lost the toss on a green pitch that seamed around I thought 266 was a good effort to be honest.

"But the sun came out on the second day and it was tough to bowl when the pitch went flat.

"We just had a bad first session on day four and didn't give ourselves a platform.

"It was a great partnership with Jos and Ashwell which was good to watch and we got somewhere near saving the game.

"I think as a bowling unit we need to keep pressure on and we need to maintain our belief in the team long term and get some confidence from scoring runs."