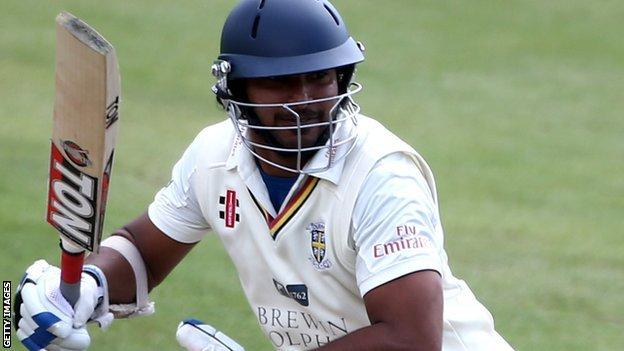 Kumar Sangakkara signed off his spell at Durham with a knock of 159 on the final day of the draw against Sussex.

Matt Machan's catch off a ball from Steve Magoffin eventually accounted for the 36-year-old, who joins up with Sri Lanka on Thursday to face Kent.

Sussex were frustrated by Sangakkara and Paul Collingwood, who was dismissed on 74, after earlier dislodging Scott Borthwick on 84 as Durham ended 451-7.

Bad weather across days two and three meant a draw was the only realistic result, but Durham batted doggedly in the race to secure batting points - although finished up just two runs short of all five at the cut-off point.

They lost Borthwick and then Michael Richardson inside the morning session but Sangakkara grew in confidence and began to cut loose, ending with 18 fours and two sixes.

Once Collingwood and Sangakkara were unseated, Phil Mustard followed shortly after from a Luke Wells catch off Magoffin again.

However, tailenders Usman Arshad and Mark Wood dug in, and with bonus points decided the match petered out to a draw.

"With the equivalent of four sessions lost in this match to rain, a draw was always likely to be the outcome.

"A slow pitch offered very little assistance to the bowlers, and it became easier the longer the match progressed

"Sussex will take positives from the exceptional performances of Luke Wright and Ben Brown, both of whom posted career-best scores, and at a time when Sussex where in deep trouble on the first day.

"In general the Sussex batting looks strong, with five batsman already having posted centuries this season, but the bowling attack struggled without the pace of Chris Jordan, and an 11-day break until the next four day game will be welcomed, particularly by the seamers.

"Final word though to Kumar Sangakkara for a wonderful innings full of quality shots, and he looked in ominously good form for the international matches ahead."

"Having lost 129 overs to the weather, this was all about batting and bowling points and Durham came agonisingly two runs short of claiming all five.

"Despite the best efforts of Kumar Sangakkara with 159 and Paul Collingwood with 74, they were on 398-7 when the bonus-point mark ended at the close of the 110th over.

"Still, Durham are unbeaten. Four draws in a row equals their run at the end of the 2005 promotion season."