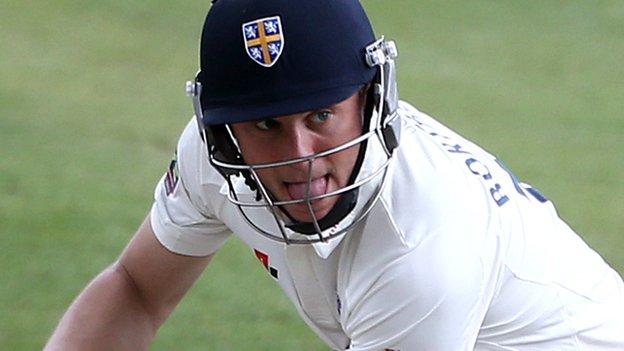 Sussex's hopes of victory against Durham have been dented by the weather, with just 45 overs possible on day three at Hove.

The hosts declared on their first innings total of 505-9 and made an early breakthrough when Mark Stoneman was caught behind inside two overs.

James Anyon took that wicket with the visitors on 3-1 and Keaton Jennings was run out by team-mate Scott Borthwick.

Borthwick made amends with the bat, reaching 84no with Durham on 137-2.

Fellow batsman Kumar Sangakkara, with whom he formed a partnership of 100, was stuck on 30 at the close, while the unfortunate Jennings made 13 and Stoneman just one.

Having begun the match second in the Division One table, Sussex will be disappointed not to build on their impressive first-innings score, while Durham, 368 runs behind with eight wickets in hand. look set to draw their fourth game in succession.

"We knew it was going to be one of those days with the weather forecast this morning. It's difficult to come off, have a lie down and a drink before you go back out again. It was frustrating.

"I've apologised to Keaton (for the run-out) I'll buy him dinner but it was one of those where as soon as I've hit it I've called two, but as I looked at him I didn't think he was coming so I shouted no but the next thing I knew he was behind me. It was one of those things.

"We just need to bat as long as we can tomorrow, get as many batting points as we can and hopefully me and Kumar (Sangakkara) can spend a bit of time on the middle. It'd be nice for me to get three figures."

"Another frustrating day at Hove means this game is almost certainly heading for a draw.

"However there is still much to play for as both sides will want to take as many bonus points as possible from the match.

"The weather forecast is good which should ensure a good day of cricket tomorrow."