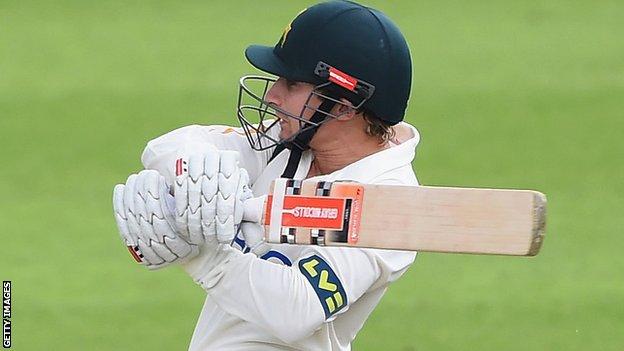 James Taylor and Riki Wessels scored half centuries, but Nottinghamshire's Championship match with Northants at Trent Bridge looks destined for a draw.

Northants were all out for 248 after only adding seven to their overnight score as Andy Carter (2-49) finished off the tail.

The hosts made a stumbling start in reply and were 30-3.

Earlier in the day, Carter quickly bowled Maurice Chambers and trapped Azharullah lbw for a fifth-ball duck as Northants only extended their innings by 19 deliveries.

Notts stuttered in reply and Alex Hales, who was recalled from a loan spell with Worcestershire to replace the injured Steve Mullaney, hit a six and a four but made only 15.

The England T20 opener was caught by David Sales off Azharullah, while Chambers (2-47) got rid of Phil Jaques, who failed to score a run in 17 balls at the crease.

Michael Lumb (10) was neatly stumped by David Murphy off the bowling of Andrew Hall and Notts were suddenly three wickets down.

Samit Patel (30) passed 500 first-class runs for the season, before becoming a second wicket for Chambers and Notts were 121-4.

Taylor, who hit 11 boundaries in two-and-a-half hours at the crease, put on 91 for the fifth wicket with Wessels, but was fifth man out, leg before to spinner James Middlebrook.

Rain interrupted play numerous times in the afternoon and a sharp shower around 18:00 BST ended the day's action, with Wessels still there alongside captain Chris Read (17 not out).

"Despite having as good a day as they could have hoped for, Notts could ill-afford to lose yet more time to the weather.

"A lead of just 11, with one day remaining, only offers slender hope of being able to force something.

"Yet, if Wessels, Read and co can bat through the final morning, there remains the prospect that Northants won't enjoy being put under second-innings pressure.

"James Taylor, despite again being overlooked by England, turned in another high-quality exhibition of strokeplay and must surely come into the reckoning for this summer's Tests."