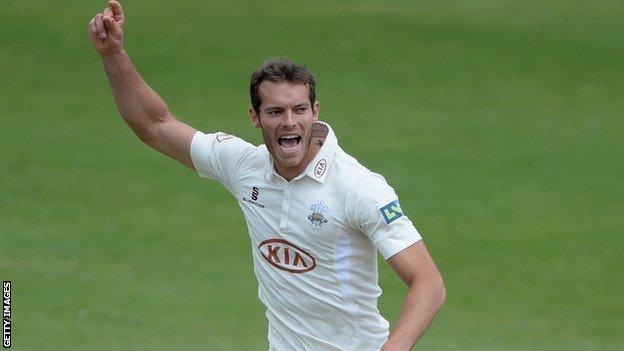 Chris Tremlett showed the England selectors he has rediscovered some of his old fire as Surrey were set 267 to beat Gloucestershire at The Oval.

Tremlett (6-59) ran in hard to claim his first five-wicket haul since August 2013 as the visitors were all out for 230 in their second innings, 266 ahead.

Earlier James Fuller starred with 6-47 as Surrey made only 132, replying to Gloucestershire's first innings 168.

After 16 wickets fell on the day one, the match moved on apace as another 14 went down on the second day.

Chris Tremlett's haul of 6-59 was his best for Surrey since taking 8-96 against Durham at Chester-le-Street in August 2013.

Resuming on 118-6, the visitors mopped up the final four Surrey wickets in just over nine overs as Fuller added two more scalps to record season's-best figures.

Gloucestershire then consolidated their advantage as they reached 106-1 in their second innings, but Tremlett, who last played for England in the first Test of the ill-fated winter Ashes tour, then found his rhythm to account for Will Tavare and Chris Dent (54).

Exploiting some variable bounce, the 6ft 7ins fast bowler, proved too hot to handle as he recorded his second-best figures in the championship for Surrey.

However, ex-South Africa captain Graeme Smith looked in the mood to lead Surrey to their first win of the summer, hitting six fours from the 35 balls he faced before the close.

"An inspired spell of bowling from Chris Tremlett has given Surrey a good chance of winning this game, but anything could still happen.

"Tremlett took 6-59 in the afternoon, but the visitors still had the runs on the board thanks to good contributions from Chris Dent and Hamish Marshall.

"Their efforts meant Surrey need 267 to win and they closed 41-0 thanks in the main to Graeme Smith, who was positive in everything he did and finished 34 not out."

"Another frenetic day has left Gloucestershire still favourites - but they must dismiss Graeme Smith early on to begin to seal victory.

"Runs were vitally important in a low scoring game, and their tail contributed to what looked like a healthy lead.

"Ian Saxelby, who bowled only two balls on the first day before pulling up, epitomised the spirit Michael Klinger wants to install in his team.

"The bowler hobbled to the crease with Klinger himself as his runner, and his valuable 20 despite being hardly able to stand could yet be the difference between defeat and victory."