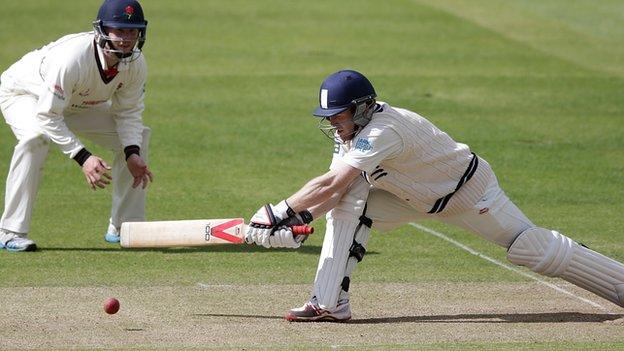 An unbeaten half-century from England's Eoin Morgan helped Middlesex into a slender lead on day two of their match against Lancashire at Lord's.

Chris Rodgers was dismissed for one before Sam Robson (51) and Dawid Malan (92) shared a 107-run partnership.

Morgan, who is hoping to break into Peter Moores' England Test squad, then helped his cause by reaching an unbeaten 76, including 10 fours.

Earlier, Malan hit 17 boundaries, but missed out on his first century since 2012 when he was run out by Ashwell Prince.

His dismissal passed the responsibility to Morgan and Dexter, whose assured innings followed a career-best 6-63 the previous day, and together they added 94 in 30 overs.

With Robson also run out by Luis Reece, Kyle Hogg was the only Lancashire bowler to take a wicket, having Rogers caught behind in his opening over with the new ball.

"Middlesex will be delighted with their performance with the bat on the second day after the worst possible start saw their talismanic skipper Chris Rogers strangled down the leg side.

"At 1-1 it could have been a tough session but Sam Robson again produced and the England selectors must surely have him at the forefront of their minds for the Test opening berth alongside Alistair Cook.

"Only two further wickets fell in the day and both were needless run outs; the first cutting off Robson in this prime, the second denying Dawid Malan his first century since 2012.

"Eoin Morgan batted very patiently, undoubtedly determined to make his case for a recall and perhaps keen to ensure that at least one Middlesex batsman reaches three figures after the fine foundations that have been laid.

"Batting appears to have become easier, with the skies blue for the best part of the day, but the second new ball is still reasonably fresh and Lancashire need inroads with it first thing or face a formidable first innings deficit."

"A tough day in the field for Lancashire who plugged away on a sunny day at Lord's but now face a fight to stay in the game.

"When Kyle Hogg picked up the wicket of Chris Rogers with just his second ball of the season - having missed the first four games through injury - things looked bright for the Red Rose but aside from some sharp fielding by Reece and Prince for the run outs, it was a day dominated by the home side.

"Lancashire will need to come out fighting tomorrow with the new ball just six overs old to prevent Middlesex from getting too far in front."