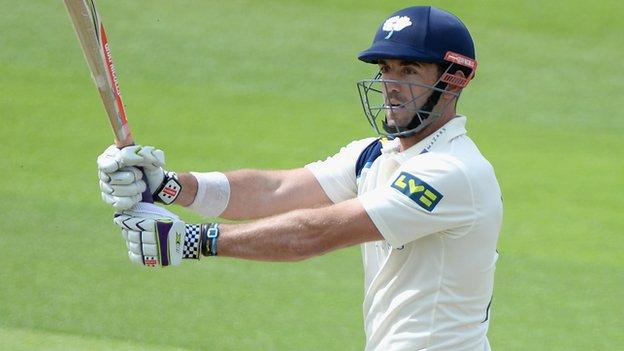 Yorkshire tailender Liam Plunkett made his highest Championship score in five years as the Tykes posted 444 against Division One leaders Warwickshire.

Plunkett was then among the wickets as the Bears limped to 136-6 in reply, rescued only by an unbeaten 58 from in-form England batsman Ian Bell.

The visitors need 159 more to avoid the likelihood of being asked to follow on.

But, even when Jeetan Patel removed Patterson with the third ball after lunch to make it 400-9, Jack Brooks came in to help add a further 44 for Yorkshire's last wicket - a fourth scalp for Chris Woakes.

Warwickshire, trailing by 308 runs and having failed to secure maximum bowling points for the first time this season, would be in an even worse mess but for Bell.

After Varun Chopra had been bowled by Brooks and Laurie Evans removed cheaply by Patterson, Bell came to the crease on 25-2.

William Porterfield, Ateeq Javid and Tim Ambrose then all followed as the Bears slumped to 88-5 before a 40-run stand between Bell and England team-mate Woakes (21).

Late worries about the light at Headingley persuaded Yorkshire skipper Andrew Gale to bring on spinner Kane Williamson - and, with only his fourth ball, he lured Woakes down the wicket and bowled him, shortly before a slightly early close.

"Yorkshire's lower-order batsmen transformed this game in the morning session. After Liam Plunkett, Steven Patterson and Jack Brooks had plundered the Warwickshire attack the initiative was completely with the home team.

"Not for the first time this season Warwickshire are left to hope that Ian Bell can bat them out of trouble. The England player's 58 not out has been more about rock solid defence than fluent batting, but he looks capable of batting for a long time if he can find a partner to stay with him.

"If the weather holds Yorkshire have plenty of time to turn their advantage into a victory, something they have failed to do a couple of times this season. Warwickshire will reflect that the Tykes were 181-6 at one stage in their innings. The Bears need an equally spectacular recovery."