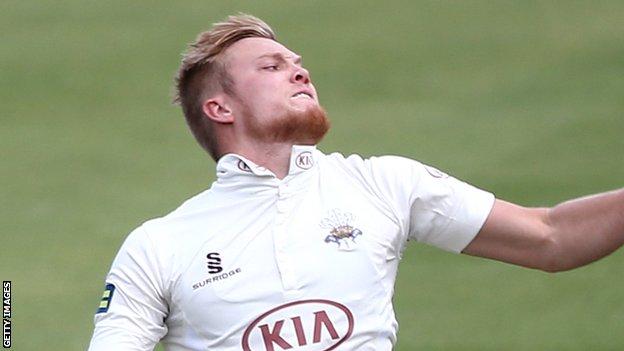 Surrey's batsmen struggled again as 16 wickets fell on day one of their match against Gloucestershire at the Oval.

Matt Dunn took career best figures of 5-48 as the visitors were bowled out for 168 with only William Tavare (59) offering anything of note with the bat.

Surrey, who are yet to pass 300 this season, were soon in trouble at 62-6 as fast bowler James Fuller ripped through the top order with 4-38.

Chris Tremlett batted watchfully for 74 balls at the other end to finish on 19 not out as the hosts moved to within 50 runs of Gloucestershire's first innings score.

Meanwhile, Surrey wicketkeeper Steven Davies relinquished the gloves to Ireland international Gary Wilson for this game, in order to focus on his batting - but was dismissed for an eight-ball duck.

Davies, 27, has played eight one-day internationals and five Twenty20 internationals for England, and also toured Australia in 2010-11 as their back-up Test keeper, but has not appeared for the national side since February 2011.

All-rounder Zafar Ansari may be able to return to the crease for Surrey tomorrow after he was forced to retire hurt on nine with an elbow injury.

"This is not a 16-wickets-in-a-day pitch but ball has certainly dominated bat.

"Matthew Dunn bowled really well for his career-best figures and Will Tavare, despite some luck, looked the stand-out batsman for the visitors.

"Surrey would have been pleased with their efforts with the ball but Gloucestershire then turned their day around with some excellent bowling.

"James Fuller was outstanding but Jason Roy (44 not out) and Chris Tremlett (19 not out) got the home side to stumps with a valuable partnership. Any lead for either side will be crucial."

"Gloucestershire's bowlers responded well to defending a small total, especially as they were without the services of Ian Saxelby, who limped out of the attack after only two balls.

"James Fuller picked up four early wickets, and Benny Howell trapped captain Graeme Smith with only his second delivery of the season.

"It's obviously going to be a low-scoring match, and Gloucestershire will be slightly disappointed they let Surrey get back into it after losing six early wickets, but Roy and Tremlett batted with due diligence to reduce the arrears to 50 by the close."