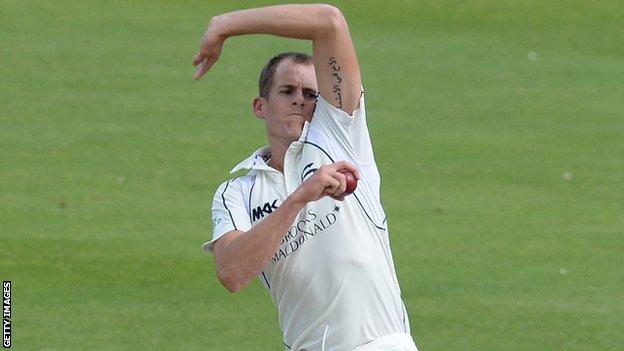 Neil Dexter produced career-best figures as Middlesex bowled out Lancashire for 266 at Lord's.

Lancashire's top order struggled to impose themselves, and they were reduced to 83-4 before Joss Butler (59) and Tom Smith (59) led a fightback.

Steven Finn bowled Smith to wrap up the innings and finish with figures of 2-60, while Tim Murtagh and Toby Roland-Jones claimed a wicket each.

Having won the toss, Middlesex elected to field and they were rewarded early on when opener Paul Horton was caught at slip by Ollie Rayner off the bowling of Roland-Jones for just 19.

Luis Reece was next to depart, caught behind by wicketkeeper John Simpson off Murtagh's bowling for 23, before Dexter bowled Karl Brown (25) and trapped Ashwell Prince (17) lbw.

Luke Procter and Buttler led the recovery, but Dexter claimed both those wickets and Finn took the wicket of Glen Chapple to leave Lancs on 222-7.

South Africa-born Dexter then returned to mop up the tail with a double-wicket maiden to dismiss Kyle Hogg lbw and have Simon Kerrigan caught by Rayner.

"Having won the toss and picked up four of the visitors' wickets by lunch, Middlesex will be disappointed not to have drilled home the advantage in the afternoon session.

"Three late wickets wrapped things up for the hosts at the end of the day but they'll know dropping Jos Buttler twice on his way to a half century allowed a mini recovery to a reasonable first innings total.

"The conditions overhead and underfoot, which favoured the bowlers all day, are set to continue throughout the match and benefited Dexter's medium pace as his persistent line and length were rewarded.

"However Lancashire will hope that they can work hard and fast in the morning to apply pressure and maintain it through the innings against a middle order that have been short of runs for some time."

"Overall I think Lancashire will feel pretty pleased with their day's work. Having been 92-4 at lunch the Red Rose fought back before a flurry of wickets for Middlesex late on.

"A second successive half century for Jos Buttler and a third 50 of the season for Tom Smith has given the Lancashire bowlers something to work with on day two.

"On a pitch which looks to be offering something, especially with the new ball, Kyle Hogg and Glen Chapple could yet make 266 look a very decent first innings total."