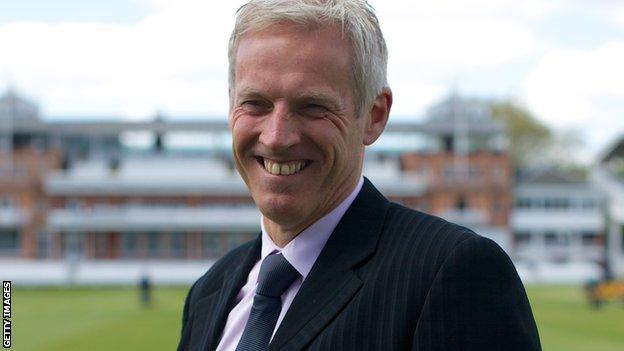 When Peter Moores was reappointed as England coach, Kevin Pietersen tweeted that "everyone deserves a second chance".

Whatever Moores achieved, or failed to achieve, during his first spell at the helm between 2007 and 2009 - England lost four of his seven Test series - his reign will mainly be remembered for the row with Pietersen that saw the captain resign and the coach sacked.

Now, following an Ashes whitewash and a failed World Twenty20 campaign that concluded with an embarrassing defeat by the Netherlands, Moores is back, this time without Pietersen to manage.

With an assistant, Paul Farbrace, in tow, 51-year-old Moores begins his second period in charge with a one-day international against Scotland on Friday, almost five-and-a-half years after he left in such acrimony.

So why, when England are once more looking to rebuild after humiliation in Australia, have they again turned to a man who, at best, had mixed results in his first spell as coach?

What has the former Sussex wicketkeeper done in his time away to deserve being reappointed? And what, if anything, will be different about the new Moores regime?

Why more of Moores?

In 2007, England were in need of evolution, rather than revolution.

Though they had just suffered an Ashes whitewash, they were an injury-hit side that were thrashed by one of the greatest Test teams of all time.

Of the XI that played against West Indies in Moores' first Test in charge, nine had toured Australia the previous winter.

There was the basis of a top six that would remain in place for the next five years, spinner Monty Panesar had proven himself as a Test cricketer, while James Anderson and Stuart Broad were emerging to eventually replace Steve Harmison and Matthew Hoggard as the new-ball attack.

But Moores' hands-on, perhaps overbearing, approach did not impress an England side full of senior players that had enjoyed a sustained period of success.

An incident after a tied one-day international against New Zealand in Napier, when Moores ordered the team out for an immediate training session in front of the Kiwis, was a tipping point for the dressing room in its support of the coach.

In his autobiography, Graeme Swann wrote: "Our opponents sat there watching us from their dressing-room balcony, beers in hand, laughing their heads off.

"It's the most humiliating and degrading session I have ever been involved in."

Speaking at the time of Moores' reappointment, former England captain Michael Vaughan said: "He was the kind of guy who would come in and try to re-galvanise a side that was pretty fine at the time, but his methods with the seniors, Pietersen, myself, Paul Collingwood, Andrew Strauss - players that had been around for a long time - didn't quite work."

Now, perhaps only five of England's Ashes tourists can be sure of their place for the first Test against Sri Lanka on 12 June.

The national team is set to move in a youthful, inexperienced direction and Swann believes that will suit the new man.

"I think he'll be great this time because of how much nurturing the new-look England side will need," said the former off-spinner. "I don't think there's anyone better in the country than Mooresy to do that."

Rehab with the Red Rose

Moores' ability to get the best out of young talent and forge a successful team from a squad lacking star names has been evident in his five-year spell in charge of Lancashire, a rehabilitation in county cricket that began little more than a month after his England exit.

"He didn't show any sort of bitterness or remorse regarding the England job," Lancashire opener Paul Horton told BBC Sport. "Even when speaking about Kevin Pietersen, he never had a bad word to say.

"Lancashire, his home county, was a really good opportunity to show the cricketing world what he could offer again. It suited us and him."

In 2011, Lancashire moved first-class cricket to Liverpool so their Old Trafford home could undergo an expensive redevelopment. The playing budget was to cut to the extent that the squad was said to be the worst since the war.

But, remarkably, the Red Rose club defied the odds to win a first outright County Championship title in 77 years. Of the XI that secured the title on a September afternoon in Somerset, only one had an international cap. Seven were born and bred Lancastrians.

Though they were relegated the following season, Lancashire made an immediate return to Division One in 2013.

"We instilled a mentality into the players that it would be challenging, that everyone would have to give an extra percent," said Lancashire director of cricket Mike Watkinson. "Moorsey was a big part in moulding that together, unifying the team so that we became effective."

"Cook is naturally cautious, so you would imagine that Moores will have to be more bullish than he has been before to ensure that England play a positive brand of cricket that moves the game forward."

If that experience will help Moores with his task of lifting an England team that have suffered perhaps the worst winter in their history, then his work with long-time Lancashire captain Glen Chapple should also aid the new appointment in avoiding a mistake he made last time.

Vaughan wrote in his autobiography that he and Moores clashed because the two men had a similar, bold approach and that both wanted more influence in the dressing room.

Moores, though, has worked alongside Chapple during his five full seasons at Old Trafford, with the veteran such an important figure at Lancashire that he now combines the role of coach and captain.

"Moorsey is an influential character. He wants to be involved because he is so passionate about it," said Horton. "But, he has worked closely with Glen, a senior man, at times letting Glen do more of the leadership role than he maybe wanted to."

Though Moores may have learned to relinquish some responsibility to his captain, it is something that may not yet be required in his second spell in charge.

"Alastair Cook doesn't like to do much talking in the dressing room and Moores does so this could be a good combination," said Vaughan.

"Cook just likes to lead from the front in terms of the way he bats, so Moores' style of coaching is probably perfect."

With a captain suited to his style of management and the likely arrival of a crop of younger players in need of guiding through their formative years in international cricket, it may be that the Moores of 2007-09 is exactly what England need in 2014.

Indeed, Watkinson believes that Moores has not made any major alterations to his style in his time away.

"I don't feel any change and the players don't feel any significant change," said the former Lancashire all-rounder, who played four Tests for England.

"His passion, energy and love for coaching comes through, but, as far as him making a personal change, that has not been something that has been significant."

Moores, however, will almost certainly bring a new style of cricket to an England team described as "dour" by Australia coach Darren Lehmann - not least because Moores has been denied the services of a world-class spinner following Swann's retirement.

27 August: First of five ODIs and one T20 against India

"He's not a fan of defensive cricket or being negative about your play for no reason," said Watkinson. "He likes players to be positive with bat in hand and be extremely disciplined when they bowl.

"He wants players to be brave and to back their ability. He creates a confidence that they can go out there and deliver without feeling restricted."

Friday's match against Scotland would perhaps have been a low-key return had it not come after a winter that has seen so much upheaval.

One-day cricket takes on greater significance with the World Cup in Australia and New Zealand beginning in February, but it is on Test match results that Moores will be measured.

Not afforded the opportunity of an Ashes series last time, barring a disastrous summer he will get the chance to win back the urn next summer.

It is then when his second chance is most likely to be judged.