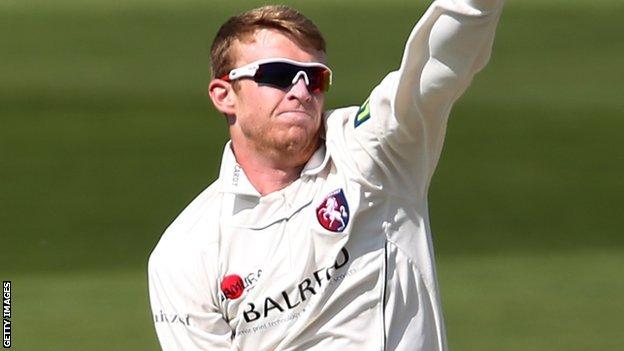 Off-spinner Adam Riley claimed his first five-wicket haul of the summer as Kent wrapped up an eight-wicket victory over Surrey at Canterbury.

Surrey's only win in 20 Championship games since the start of the 2013 season came when they beat Derbyshire by four wickets last September.

Surrey's total of 203 left Kent needing only 54, but they lost two wickets to Aneesh Kapil after a rain interruption.

It was Kent's first win of the summer and it had looked a formality at the start of play when Surrey resumed on 170-9.

Dernbach and Matt Dunn (13 not out) kept the home side at bay for nine overs before Riley ended their resistance with the former's wicket.

Only one ball of Kent's second innings was possible before rain arrived and when play re-started, Sam Northeast was immediately lbw to former Worcestershire seamer Kapil for a duck.

First-innings centurion Rob Key fared little better as he was caught by Jason Roy for three, but Bell-Drummond struck five boundaries as he and Nash, who made 126 earlier in the match, finished the job.

Surrey's defeat was their second of the season, following relegation in 2013, and they have yet to win in four games so far.

"We had a really good pre-season and a good vibe but we didn't quite start the season as we would have liked.

"We have come here against a decent Surrey side and put in a really good performance; a proper game of four-day cricket on a proper wicket.

"The groundsman deserves huge credit as it is probably the best wicket I have played on at Canterbury for years."