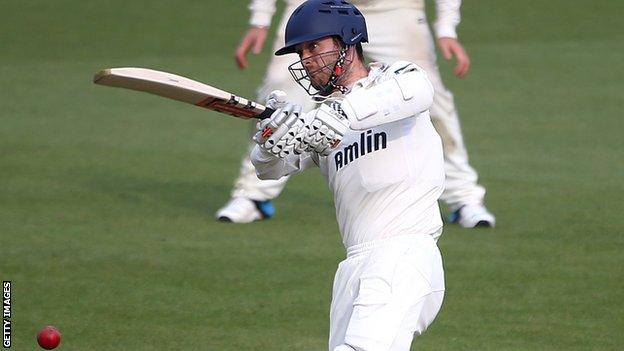 James Foster and Kishen Velani's sixth-wicket stand of 58 earned Essex a draw against Leicestershire at Chelmsford.

Leicestershire picked up four wickets despite a couple of brief rain hold-ups, with Charlie Schreck taking 2-48.

But 19-year-old Velani (21 not out) and skipper Foster (41 not out) guided the home side to a third successive draw.

"For a brief moment when Essex's fifth wicket fell to the first delivery of the second new ball, an improbable Leicestershire victory was a distinct possibility. The score was then 213-5 with Essex a fragile 61 runs ahead.

"But 19-year-old Kishen Velani displayed the coolest of heads to guide Essex to the safety of a draw in the company of his captain, the ever-dependable James Foster - the pair putting on 58 unbroken with few alarms.

"Leicestershire have had the better of three consecutive draws, and with a little more urgency in their second innings might have registered their first away victory since 2010."

"Given the difficulties caused by international call-ups, together with the injury-enforced absence of a number of senior bowlers including David Masters, Graham Napier and, after bowling just 10 overs of this match, Tymal Mills, Essex must be happy with eight points from a drawn game.

"And it was interesting to hear head coach Paul Grayson call for James Foster to be recalled by England.

"Leicestershire continue to impress with positive cricket and fine individual performances, but their frustration was considerable after dominating, but being unable to force a win on a flat pitch for the third match in succession."