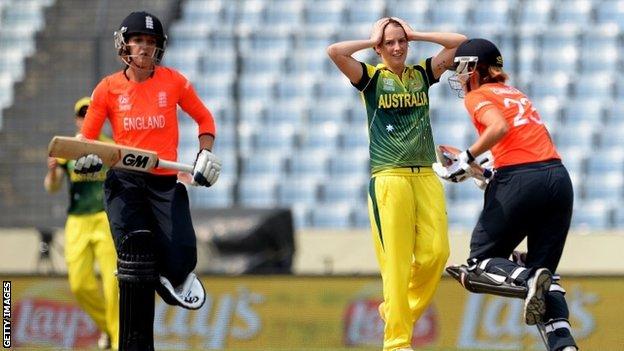 The first 18 women cricketers to be awarded central England contracts have been named by the England and Wales Cricket Board.

England captain Charlotte Edwards, a Wisden Cricketer of the Year at 34, is one of five Kent players included.

"It's given me a new lease of life," said Edwards. "Potentially I'll have another three or four years as a pro."

She added: "It excites me in terms of the fact I can improve but, more importantly, hopefully we can attract more young girls to the game.

"For those young girls just arrived in the England set-up, they have a huge opportunity to have a career in cricket over the next 10 years."

Jodie Dibble and Fran Wilson are the only players from the squad which took part in the recent Women's World Twenty20 who have not been awarded a central deal.

The announcement follows the decision by the ECB board in February to significantly re-invest in the women's game, with all 18 contracted players now set to benefit from the new and improved financial arrangements.

Despite the World Twenty20 final loss to Australia, head of England women's cricket Clare Connor said: "The performances delivered by Charlotte Edwards and her team over the past 12 months, including back-to-back Women's Ashes triumphs, a historic series win in the West Indies in November, and reaching the ICC Women's World Twenty20 final in Bangladesh, unequivocally justify the financial reward which comes with the new England women's contracts.

"The pay increase for the contracted players is significant and signals the dawning of a fully professional era in every sense for England women's cricket."

Paul Downton, managing director of England cricket, added: "The England women's team always prepare to excellent standards, and have been professional cricketers in all but name for a while now.

"International women's cricket has developed at a fast pace over the last few years and is now a year-round operation. The new arrangements will allow the 18 contracted players to train as full-time professionals."

Minister for Sport Helen Grant said: "Today's announcement by the ECB is a significant step forward, not just for women's cricket, but for women's sport in this country."