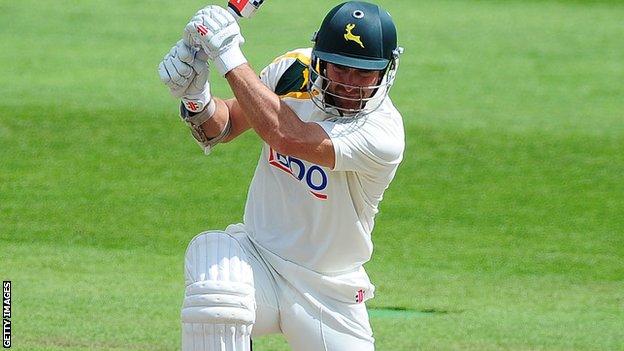 Phil Jaques scored his second half-century of the game as Nottinghamshire lead Somerset by 135 runs at Taunton.

Notts, who had a first-innings lead of 38, extended that to three figures as they closed on 97-2.

Jaques, who is on a short-term contract at Trent Bridge, has now scored three half-centuries for Notts this season and amassed 254 runs at an average of 36.28

Jaques was unbeaten on 55, while Michael Lumb made a resolute 28.

The game was delicately poised on the third morning and Craig Kieswetter (39) was the first wicket of the day to fall, caught and bowled by Samit Patel (2-56).

Ajmal Shahzad picked up his first dismissal of the game when he had Petersen caught behind by Chris Read, with the South Africa international six shy of a 35th first-class century.

Johann Myburgh, trapped lbw by Andy Carter (3-90), and Liam Gregory, caught by Steven Mullaney off Patel for five, quickly followed to leave the home side on 336-8 and Notts sensed a sizable first-innings lead.

But lusty hitting from Trego, whose 86 came in just 84 minutes at the crease, helped the hosts to maximum batting points.

Notts found the going tough in the second innings and laboured their way to 41-1 from 21 overs at tea, with Mullaney falling leg before to Alfonso Thomas for five.

Their slow progress was emphasised by Lumb's 28 from 104 balls, before he was caught behind by Kieswetter off Myburgh.

Jaques upped the scoring rate after the interval, before rain brought an early finish to day three.

"A typically durable innings from Phil Jaques ensured that Notts didn't lose all of the initiative on a day when Peter Trego altered the momentum with a belligerent 86 for the home side.

"Jaques has looked better and better with each innings for his new county.

"The hope is that his unbeaten 55, his third consecutive half-century, may lead to a really substantial score on the final day."