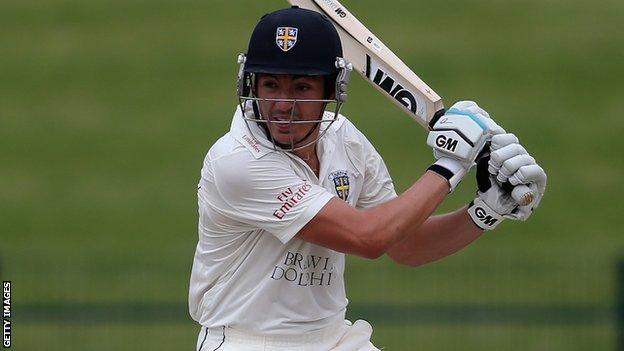 The home side batted all day and were 361-8 at stumps but still need another 79 to avoid the follow on.

Opener Matthew Stoneman, resuming on 48, went on to make a vital 131 to keep Durham in the match, sharing 136 with Richardson for the fourth wicket.

Five Durham batsmen made less than 10 runs but Richardson's career-best score keeps their hopes of a draw alive.

Tail-enders Jamie Harrison and Graham Onions will resume on the final day on 15 and 12 not out respectively.

A draw would be Durham's third of the season so far, while Yorkshire are chasing their second win of the campaign.

"Yorkshire are well on top in this match, but Durham have shown grit and determination which might well give them a draw. Centuries from Stoneman and Richardson have held up victory hopes for Yorkshire.

"There was expectancy when Test batsman Kumar Sangakkara came to the wicket for Durham but he lasted two balls on his debut, Sidebottom claiming his wicket for nought.

"Yorkshire put down a couple of catches but stuck to their task. Tim Bresnan and Ryan Sidebottom bowled well but Rashid has taken the most wickets, 3 for 70, from 18 overs.

"However, you have to admire the spirit of the champions."