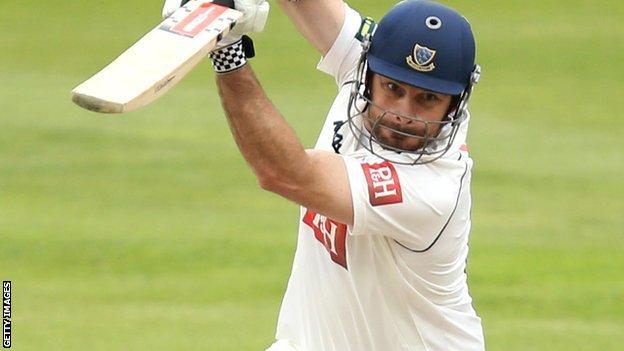 However, if they are to force a result, Sussex may need to add quick runs on the final morning before forcing another Lancashire collapse.

The hosts had been 80-6 on day two before Smith went on to share 82 with Davies, in the process dragging their side to a more respectable total.

But they departed in relatively quick succession and Steve Magoffin (4-36) brought the innings to a close by trapping Kyle Jarvis in front for a duck.

Yardy, who struck 139 in his side's first innings, hit just one boundary in his 102-ball 45 before falling to Steven Croft, while spinner Simon Kerrigan (2-80) saw off both Wells and Hamilton-Brown.

Glen Chapple (2-45) had Luke Wright caught by Luis Reece for 18 late in the day, but Machan and Ben Brown (six) saw Sussex to stumps.

"Lancashire worked hard to try and prevent Sussex getting away from them in this game, but ultimately the visitors hold all the cards going into the final day.

"The Red Rose were unable to make real inroads into the Sussex first-innings total despite an excellent partnership between Alex Davies and Tom Smith.

"A maiden first-class fifty for Davies was a stand-out moment on a tough day in the field for Lancashire, who are now likely to face an overnight declaration and a day of batting."

"Sussex are in complete control at Old Trafford, although an inclement weather forecast tomorrow may ultimately deny them the victory their dominance has deserved.

"Skipper Chris Nash will need to decide whether to bat on tomorrow morning and make the game completely safe.

"However, on a wicket where scoring runs quickly has been difficult throughout the match, an overnight declaration must represent the best chance of a third Championship victory of the season for Sussex."