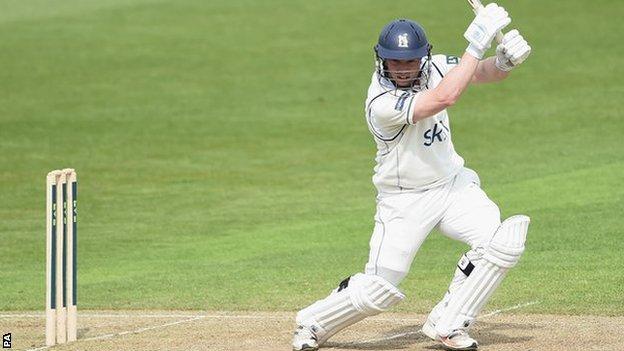 Tim Ambrose hit his best score in seven years as Warwickshire seized control of their County Championship Division One meeting with Middlesex at Edgbaston.

He put on 175 for the seventh wicket with fellow centurion Jeetan Patel (105) before fast bowler Chris Wright weighed in with 52.

Middlesex, 295 in arrears, then faced just one over before closing on 0-0.

James Harris was sent in as nightwatchman along with regular opener Sam Robson and both came through unscathed.

England's Steven Finn took two wickets in the first half hour for Middlesex to leave the Bears in trouble on 140-6.

But former England wicketkeeper Ambrose, reaching the first 50 of the match, and New Zealand Test all-rounder Patel had already put on 76 by lunch.

Both reached their century in the afternoon session, but, after bringing up his hundred with a six, Patel perished to the very next delivery.

"Warwickshire achieved the commanding position they would have expected after taking eight morning wickets on Sunday, but not by the expected route. At 140-6, still 27 behind, they could have squandered that advantage completely. But Jeetan Patel and Tim Ambrose made contrasting but equally impressive hundreds to ensure they didn't.

"Patel is a much more selective player than the do-or-die hitter of a few years ago. His attacking play was calculated, and he played with freedom but relatively little risk. He took all the pressure off Ambrose to score quickly, although the Warwickshire wicketkeeper was quite capable of taking runs briskly when the opportunities arose.

"This score had been coming for a while for Ambrose. He had timed the ball sweetly while making modest scores in the early weeks of the season, but this time there were no mistakes and he was in control throughout.

"The hardest work for the hosts may lie ahead. Middlesex face a huge deficit but the pitch remains true and they showed against Yorkshire last week their powers of recovery from an apparently impossible position."

"Middlesex face a monumental task with the bat for the second successive week after Warwickshire dominated the second day.

"The hosts batted patiently, reaping full reward as they moved into an impregnable position (although we said that about Yorkshire last week).

"Tim Ambrose deserves great credit, batting for the vast majority of the day, but was helped by an aggressive century from Jeetan Patel that really took the game away from Middlesex, who would have felt that they were fighting back strongly at 140-6.

"The pitch has been described as "benign" by Middlesex head coach Richard Scott but the scoreboard pressure will be monumental on his side's batsmen.